A Dying Star Is Reborn in a Lab

If you want to know how plasma behaves, just pump 26 million amps into some hydrogen and you'll soon find out. 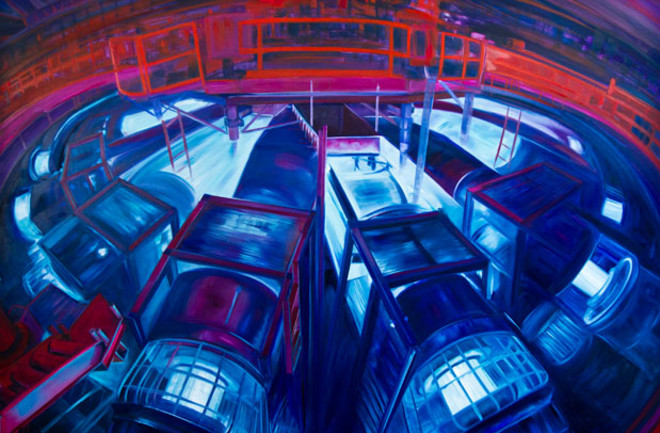 Astronomer Don Winget studies stars, yet his targets are never more than yards away. For the past two years, Winget and his colleagues at the University of Texas at Austin and Sandia National Laboratory in Albuquerque, New Mexico, have been creating searing plasmas that are, in effect, miniature versions of white dwarfs, ancient stars that have burned up all their nuclear fuel. “Astronomy has now become an experimental science,” Winget says.

White dwarfs are the slowly dying embers of stars like our sun. With no nuclear fusion to sustain them, they collapse into Earth-size balls of tightly bound carbon and oxygen nuclei with an outer layer of hydrogen plasma (disrupted atoms). Astronomers have a lot to learn about white dwarfs, starting with the stars’ plasma exterior, since that is the only part directly visible through a telescope.

So in 2010 Winget decided to try fabricating the plasma himself. He took a cigar-size sample of hydrogen gas and exposed it to blasts of electricity from Sandia’s Z Machine, which generates more powerful electrical pulses than any other man-made tool. Within 20 billionths of a second, 26 million amps of current transmuted the room-temperature hydrogen into 20,000-degree-Fahrenheit plasma, similar to that observed on the surface of white dwarfs.

Now that Winget has performed more than 30 simulations, astronomers can start using his measurements of how hydrogen plasmas absorb and emit light in the lab to make sense of actual white dwarfs. The new data should help scientists calculate the ages of these fading stars and gain insight into how matter behaves under extreme temperature and pressure.