A Dry Cleaner Once Demanded Restitution from NASA 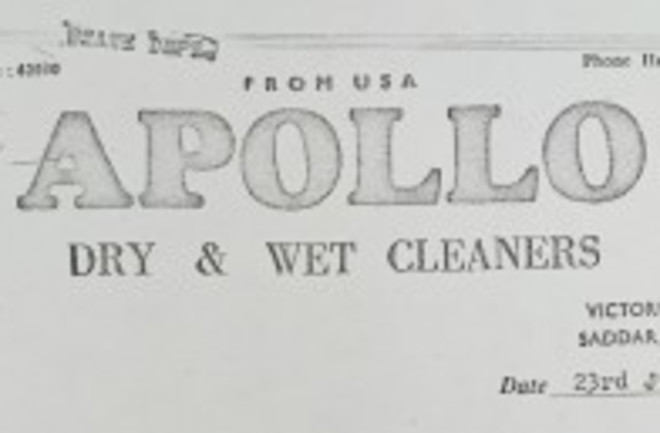 From the Nixon Library. The amazing thing about national archives is that these libraries contain absolutely everything. Case in point: I recently found a letter in the Nixon Library from the Apollo Dry & Wet Cleaners in Pakistan. The owner was, apparently, a little miffed NASA took his business’ name for the lunar landing program and wanted press materials as restitution. National archives, especially Presidential archives, are like a weird form of historical spelunking. Everything that anyone anywhere has ever sent a President (at least, in the last half-century or so) ends up as part of the national record in that president’s library. And those libraries are, of course, free and accessible to the public, which means they can be a treasure trove of strange little tidbits no one knows about. I was at the Nixon Library recently looking for such gems recently when I came across a letter from the Apollo Dry & Wet Cleaners in Karachi, Pakistan. It was sent to Sam Phillips, director of the Apollo program, cc’ed to President Nixon, the American Centre in Karachi, the American Ambassador in Karachi, as well as Rocco Petrone, Director of Launch Operations at Kennedy. The full text, without corrections for typos and somewhat awkward grammar, reads:

We, Apollo dry Cleaners, hereby invite your kind attention and would liek to request your honour that you may please send us the diagram & catalogues of Apollo 10 and 11 regularly and kindly reply to us that you have copied the name of Apollo as we started business 20 years before while NASA was not in picture.At least, a letter of recommendation from your honor should be furnished to us in the name of Apollo Dry Cleaners, who have several branches in Karachi (Pakistan) and are well

We requested to book space for our branches on 11th October 1968 at the time of Apollo 7 but still not replied from you. You may very kindly reply this time and oblige.Yours faithfully, for Apollo Dry Cleaners,[I can’t really make out the signature but it maybe looks like Saeed?] I couldn’t find any official White House reply at the Nixon library. And I didn’t know about the letter when I was at the Lyndon Johnson Library last year; if they did write about attending the Apollo 7 launch, it would be in the LBJ archives since he was president at the time. I’ll have to keep this one in mind next time I’m in the NASA archives to see if the agency did, in fact, send Apollo 10 and 11 literature to the dry cleaners in Pakistan.

My photograph of the full letter from the Nixon Library. As far as I can tell, the Apollo Dry & Wet Cleaners has since closed. And for course, NASA didn’t get the name from this dry cleaner. In July of 1960, NASA was looking ahead at its next program after Mercury, vaguely planned as a manned circumlunar mission. Abe Silverstein, Director of Space Flight Development at NASA, proposed that program be named “Apollo” for the ancient Greek god of associated with archery, prophecy, poetry, music, and most significantly the Sun and light. It also continued the trend of naming projects for mythological gods; Mercury is the Roman god of, among other things, travellers, and is associated with Hermes, the fleet-footed messenger of the Greek gods. NASA publicly announced "Project Apollo" would be the manned lunar program at a conference on July 28-29, 1960.