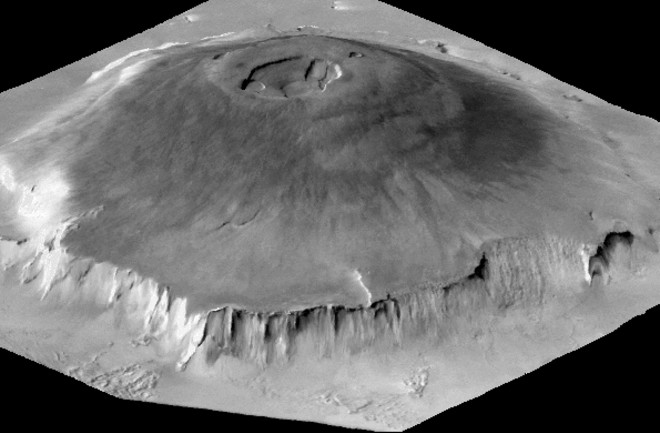 A 3-D image of Mars' massive volcano, Olympus Mons, which is the largest in the solar system. (Credit: NASA)

For millions of years, a group of tiny asteroids circled our solar system. Then, around 9 a.m. on June 28, 1911, one blazed into earthly skies near a village outside Cairo, Egypt. Locals watched the fireball, and they heard its explosion. A farmer even claimed a dog was killed by one meteorite fragment, making it — if true — the only known modern space rock casualty.

Let's hope it was just a rumor, but NASA says there's no reason to doubt it. In the years since, about a dozen siblings from that meteorite have been found all over Earth. Astronomers call these nakhlites, and they all hail from Mars. And although these space rocks have been studied for decades — scientists already knew the rocks originally formed in volcanic environments — an analysis published this week in Nature Communications has uncovered something strikingly new about the igneous nakhlites.

By figuring out how much time these meteorites spent in space, the scientists determined all nakhlites were born when an asteroid hit a single martian volcano 11 million years ago. “They were all excavated from Mars in the same impact cratering event,” says Benjamin Cohen of the University of Glasgow, who led the study. “And if they are from the same impact crater, they are from the same volcano.”

What’s more, the scientists reconstructed that volcano’s growth rate and found evidence of four significant eruptions roughly 1.3 billion years ago, which took place over a period much longer than any Earth volcano could be active. “What's special about the new results is that they indicate that the single volcano was active for more than 90 million years, which is a long time for an individual volcano,” Cohen says.

Most of the Red Planet’s volcanoes formed as mantle plumes–like Hawaii. Take, for example, Mars’ four volcanoes that are each taller than Mount Everest and huddle together in the Tharsis Bulge. Among those is Olympus Mons, a giant that dwarfs all other volcanology in our solar system. Those monstrosities grew so large because Mars is too tiny for plate tectonics, which, on Earth, spread magma out instead of piling it up and growing perpetually.

Cohen’s study shows that this one martian volcano grew 1,000 times slower than similar ones on our own planet. That means Mars’ other volcanoes could have also taken an absurdly long time to grow to their current size. In other words, they were active far longer than scientists previously thought.

And because the meteorites also contain minerals that form as water percolates through rock, astronomers know liquid water was present on Mars some 1.3 billion years ago. “(The meteorites) are a unique way for scientists to study pieces of Mars right here on Earth, in much more detail than can be achieved from satellites, or even rovers,” Cohen says.