A Cure for Paralysis: One Scientist's Prediction Delivers Mixed Results

10 years ago, physiologist Chet Moritz predicted there could be a cure for paralysis in as little as a decade. Was he right? 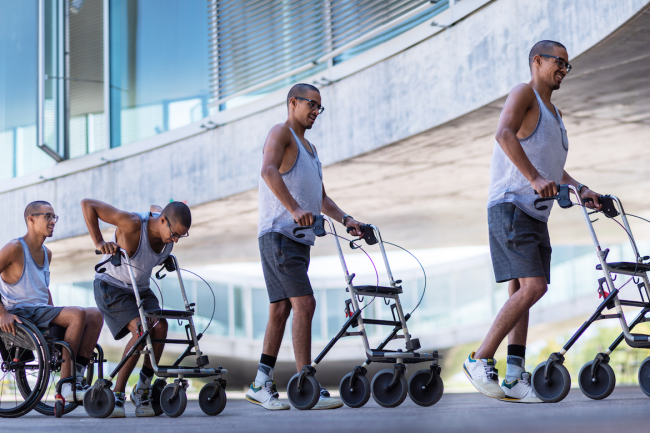 In 2009, Discover reported that University of Washington physiologist Chet Moritz had made serious strides toward curing paralysis. He and his colleagues figured out a way to record and transfer signals from a macaque’s brain to its paralyzed arm, bypassing its injured nerves, and allowing the monkey to control its limb once more.

Challenges remained, but Moritz told Discover he thought advances in these technologies could provide an answer to paralysis in as little as 10 years. Well, it’s 2019 — was he right?

Yes and no. Three different research groups have recently announced that they’ve achieved the first independent walking steps taken by patients with spinal cord injuries. But the groups, all unaffiliated with Moritz, didn’t do it his way.

Instead, the teams figured out how to coax the injured nerves to work on their own using “epidural stimulation” — electrical pulses delivered directly to the spinal cord.

These pulses don’t give the limbs specific instructions; rather, the electricity provides the existing nerves the boost they need to let the brain communicate naturally to the paralyzed limb. It’s an approach that could help treat paralysis cases where some nerve connections remain — about 90 percent of people with spinal injuries.

For the 10 percent of people with a completely severed spinal cord, Moritz’s method may still be the best path forward, since it bypasses the need for any nerve-based communication. But, he says, the type of biomedical device required for reading and understanding brain signals is not quite ready.

“If I had known [in 2009] what I know now about implanted medical devices, I would’ve said more than 10 years,” says Moritz.

Epidural stimulation is promising; besides improved mobility, some patients also regained bladder/bowel control and even some sexual function. And Moritz’s own explorations of spinal electrical stimulation have shown it has similar effects on paralyzed arms, not just legs. But he emphasizes that we haven’t “cured” paralysis. “I think it’s important to call it stepping, as opposed to walking,” he says. “They’re not walking away from their wheelchair with their hands on nothing, with no body weight support, with no balance aids.” Researchers still need to work on restoring the quick, smooth gait we typically picture as walking.

“So that can be my next 10-year prediction,” says Moritz. “Ten years from now, we’ll have people walking as if they didn’t have a spinal cord injury before.”

[This story originally appeared in print as "Next Steps."]