Skipping the Problem Is a Jump Towards Curing Paralysis

Researchers discover a way to re-route brain signals to a paralyzed limb. 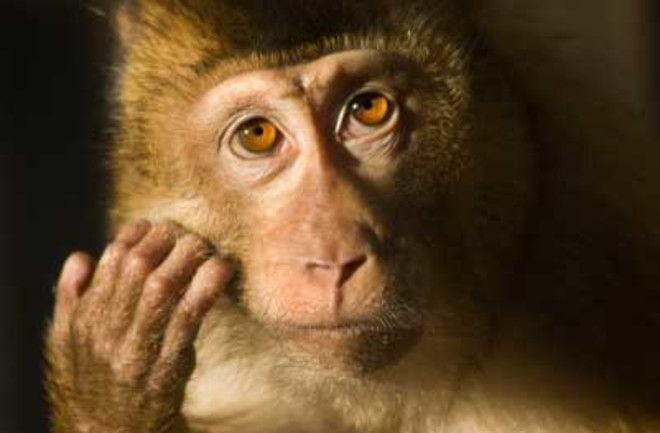 At the Washington National Primate Research Center last year, scientists took a big step toward curing paralysis. After temporarily paralyzing a macaque’s arm, physiologist Chet Moritz and his colleagues rerouted signals from the animal’s brain through two circuit boards and around the blocked nerve pathways to the paralyzed limb, where they once again could control the arm muscles.

Curing paralysis has long been an elusive goal because moving an arm or a leg involves such a complicated chain of events. First you have a thought, then an electrical impulse flows down your spine to your limb, muscles contract, and voilà! You just waved to a departing friend. But when the spine is damaged, your action stops at the thought. Scientists have worked for decades to extract movement commands directly from the brain. Their greatest successes are with brain-machine interfaces that enable paralyzed monkeys or people to control prosthetic arms.

Even though Moritz demonstrated that wiring the brain directly back to the disabled limbs can succeed, many barriers remain before the technology becomes an all-out cure. The apparatus that bypassed the macaque’s paralysis had cumbersome systems of wires and an interface that can transmit signals from the neurons for only a few weeks before the normal movement of the brain within the skull separates the neurons from their electrodes. Also, in Moritz’s system an individual neuron controls a single set of muscles, making complex full-arm motion potentially difficult. Despite these challenges, Moritz thinks that smaller electrodes, smart engineering—such as floating electrode arrays under the skull—and advances in wireless technology could provide an answer to paralysis in as little as 10 years.