A child couldn’t paint that – can people tell abstract art from a child’s or chimp’s work? 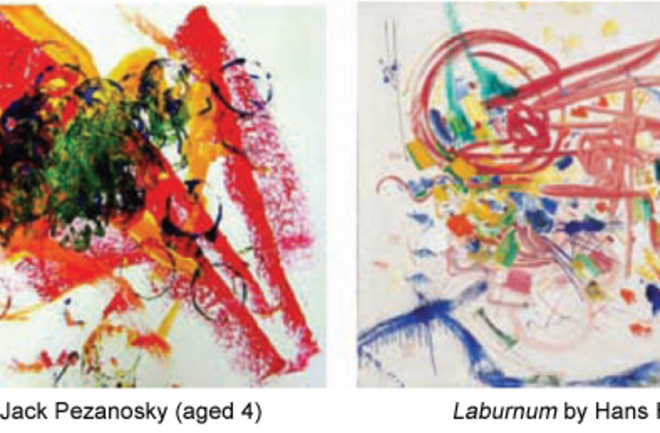 If you wander through New York’s Museum of Modern Art, you’ll eventually come across Painting Number 2 by Franz Kline, a set of thick, unruly black lines on a white canvas. Elsewhere, you will find one of Mark Rothko’s many untitled works, consisting of various coloured rectangles. And in front of both paintings, you will inevitably find visitors saying, “A child could paint that.”

To which Angelina Hawley-Dolan and Ellen Winner replied: “Could they?”

The duo wanted to test the assertion that abstract expressionist art is devoid of talent – that it could be done by a mere child, or even an animal. With keyboards and enough time, monkeys could surely duplicate Shakespeare, but with a paintbrush and a few hours, could a monkey produce a Rothko?

To find out, Hawley-Dolan and Winner asked 32 art students and 40 psychology students to compare pairs of paintings. One piece of each pair was the work of a recognised artist, such as Kline, Rothko, Cy Twombly, Gillian Ayre, and more. The other came from the oeuvre of lesser-known painters, including preschool children, elephants, chimps, gorillas and monkeys. The paintings were matched according to colour, line quality, brushstroke and medium; the students had to say which they preferred and which was better.

Both groups of students preferred the professional pieces to the amateur ones, and judged them to be superior. Even the psychology students, who had no background in art education, felt the same way, although as you might expect, their preference for the professional works was slightly weaker.

Throughout the experiments, the students typically picked the professional pieces between 60% and 70% of the time. These aren’t overwhelming majorities, but they were statistically significant. On average, a child could not “paint that”, even if first glances might suggest otherwise. Nor are the qualities of the abstract art only visible to people steeped in the art world – even untrained people responded to the paintings in some way.

Hawley-Dolan and Winner also found that it didn’t matter if the students were duped into thinking that the paintings came from the wrong “artist”. The duo labelled the pairs of paintings on some of the tests (“artist”, “child”, “monkey” or “elephant”) and mislabelled them on others. Even with these tags, the students still preferred the actual professional painting. The labels only swayed the decisions of the psychology students – they were more likely to judge the professional paintings more positively if they were correctly labelled (but not more harshly if the labels were swapped).

This goes against an earlier experiment by Ulrich Kirk, who found that people find paintings to be more aesthetically pleasing when they’re labelled as having come from a gallery, rather than having been generated by computers. Other anecdotes have also painted an unflattering picture of abstract art. The mother of two-year-old toddler Freddie Linsky managed to dupe the art world by selling her son’s work – including a splash of ketchup on a high chair – on Saatchi Online (admittedly, for a paltry £20). A chimp called Congo fared much better, selling off three paintings for £12,000 at Bonhams auction house.

But none of these stories involved paired comparisons. Hawley-Dolan and Winner think that such side-by-side judgments are better ways of telling if people can discriminate between pieces produced by different painters.

When asked why they made their choices, both groups of students speculated about what the artist was trying to achieve, or what was going through their mind at the time. They saw more of such intentions in the professional pieces than in the more random shapes of the children and animals. As Hawley-Dolan and Winner write:

“People untrained in visual art see more than they realize when looking at abstract expressionist paintings. People may say that a child could have made a work by a recognized abstract expressionist, but when forced to choose between a work by a child and one by a master such as Rothko, they are drawn to the Rothko even when the work is falsely attributed to a child or nonhuman. People see the mind behind the art.”