A Century Ago, Einstein’s First Trip to the U.S. Ended in a PR Disaster

The scientist insulted Americans in a newspaper interview, requiring a hasty apology tour. 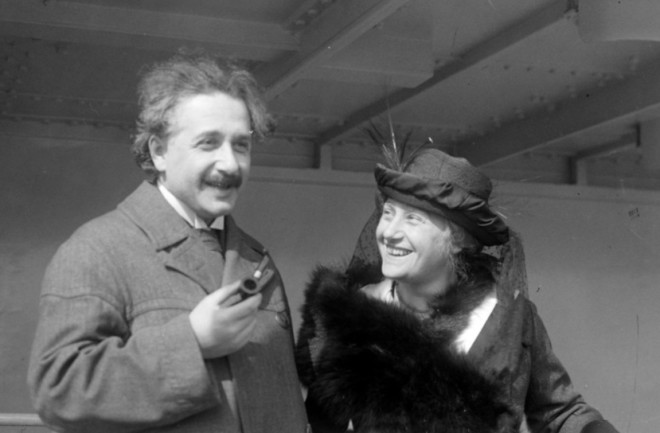 One hundred years ago, Albert Einstein first stepped foot in the United States. The journey served as a fundraising tour for a new Hebrew University in Jerusalem and an opportunity to lecture at some of America’s most prestigious academic institutions. It was also the moment Einstein established himself as a bona fide "celebrity scientist” in the English-speaking world — until a disastrous interview nearly unraveled the whole thing.

On April 3, 1921, the physicist arrived in New York Harbor to handkerchief-waving fans and throngs of photographers. He’d shot to fame a year and a half before when he demonstrated that the sun does in fact deflect starlight and bend light, verifying one of the classic tests of his Theory of Relativity and sending shockwaves through the scientific community. Einstein was now the most famous scientist in the world, both for his research and his personal quirks.

“They’re focusing on his wild and wooly hair and that he plays the violin and has the pipe, and those personable touches that get lots of people interested,” says Trevor Lipscombe, director of Catholic University of America Press and author of Albert Einstein: A Biography.

Chaim Weizmann, president of the World Zionist Organization, had organized the trip and persuaded the celebrated Jewish scientist to help draw attention (and donations) to establishing a Hebrew University in Jerusalem.

Though not a practicing Jew and a self-identified non-Zionist, the cause of the University mattered to Einstein because he felt concerned by growing anti-Semitism and the limits on Jewish people’s access to universities throughout Europe. In fact, it was an important enough trip that he opted out of attending the third Solvay Conference on Physics, a major gathering of European scientists.

“The organizers thought that with Einstein being a fellow non-Zionist, he could draw support from other non-Zionists,” says Ze'ev Rosenkranz, assistant director and senior editor of the Einstein Papers Project at California Institute of Technology.

Einstein was received warmly at a string of charity dinners, ticker-tape parades and a meeting with President Warren G. Harding. Throughout, the physicist diligently spoke in favor of the need for a Hebrew University in Jerusalem, raising more than a quarter-million dollars toward that goal.

He also gave a series of talks at Harvard, Columbia, the City College of New York and elsewhere. Most celebrated was a series of four lectures at Princeton University, where he laid out his Theory of Relativity more fully than ever before.

While broadly a success, the tour exhausted Einstein. A natural introvert who spoke primarily in German, he often found himself overwhelmed by the attention from the press and public. While he expressed excitement about the trip, the scientist privately bristled at being “shown around like a prize ox” and said he was relieved when he boarded the Celtic ship to return to Europe.

Einstein’s relief after returning home may have led the otherwise cautious scientist to let his guard down. At the beginning of July, Einstein agreed to an interview with Nell Boni, a young Berlin correspondent for the Dutch newspaper Nieuwe Rotterdamsche Courant (who was also a family acquaintance). “He basically thought he was talking off the record,” Rosenkranz says.

During their casual and wide-ranging discussion, the physicist expressed himself more freely than he had ever done while in the states. The lengthy interview appeared in the Courant on July 4 to little attention.

But the comments quickly ricocheted: Three days after the initial interview, excerpts translated into German were published in Berliner Tageblatt, the most popular liberal German newspaper in Berlin. These excerpts were then translated into English and published the next day in the New York Times.

Rather than an expansive conversation about Einstein’s reflections on his trip, Americans picking up their Times on July 8 were greeted, under the headline “Einstein Declares Women Rule Here,” to a fusillade of casual insults of the country he’d dazzled just weeks before.

Backlash followed immediately, provoking complaints from newspaper editors, academics and members of the public, who defended the U.S. and questioned the scientist’s character. Within three days of the story hitting print, the New York Times featured updates and analysis under headlines including “Chicago Women Resent Einstein’s Opinion,” “Probably He Did Say It All,” “A Product of His Education.” The Gray Lady also published a letter from Popular Science editor Kenneth Payne claiming that the “Eminent Scientist Failed to Understand Us.”

Rather than complete anger, many responses expressed sadness that the charming genius who’d engrossed Americans did not seem to reciprocate their warm feelings.

Polish-American physicist Ludwik Silberstein wrote directly to Einstein, expressing concern from him and other scientists, asking that “you please tell me whether this ‘correspondence’ originates with you (I mean, whether what you said has been correctly reproduced) or is instead an invention by the newspaperman and therefore the whole or a part of it is false.”

The comments, of course, alarmed Chaim Weizmann. The negative coverage threatened to not only embarrass Einstein, but to hurt the entire effort he’d been enlisted to help.

Einstein scrambled to clean up the mess, telling the Tageblatt editor that he “absolutely disagrees” with the translation of what he’d said. He sent a telegram to the Zionist Organization of America (a rival to the World Zionist Organization) declaring that he would like “to deny the veracity of statements credited to me” in the story.

He even provided an interview to the Berlin newspaper Vossische Zeitung in which he referred to the original story as “so hopelessly inaccurate that I feel more than justified in giving my own account” to refute it.

While Einstein issued one response after another, “he’s not exactly denying everything that he said,” according to Rosenkranz. “He wasn’t upset by the views that were published as much as how they were perceived and the selectiveness of it.”

Indeed, the New York Times headlined its coverage of this interview as being, “Explanation Rather Than Denial.”

Einstein’s efforts managed to at least partly calm the furor. By July 18, Silberstein wrote to Einstein expressing relief that “we knew very well that this correspondence (evaluation of America) cannot have stemmed from you.” Most seemed willing to just take the scientist’s word for it that he meant no ill will.

Overall, Einstein proved himself as comfortable saying one thing in public while expressing less prudent views privately. Lipscombe points to a stirring eulogy he gave for Marie Curie in which he said many wonderful things about her, but also wrote in a private letter that she “is very intelligent, but has the soul of a herring, meaning that she is lacking in all feelings of joy and sorrow.”

And in The Travel Diaries of Albert Einstein, edited by Rosenkranz, Einstein expresses a variety of stereotypes and racist views about people he meets throughout his travels through Asia and the Middle East. These writings conflict with his civil rights advocacy later in his career.

However accurate the original report had been, Lipscombe sees the many times Einstein attempted to clean up his statements as characteristic of the physicist, who would sometimes speak first and clarify later. “In his science writing, very often he writes a paper, then he writes either a correction to it or an addendum to it,” Lipscombe says. For example: the famous Princeton lectures Einstein had delivered three months earlier.

“Although the Theory of Relativity was completed and published in 1919, it took several years of revisions and refinements of the arguments,” says Hanoch Gutfreund, former president of the Hebrew University of Jerusalem and co-author of Einstein on Einstein, published last year. Similarly, Einstein’s apology took a few tries before he felt it was satisfactory.

While the post-tour interview mess reflected how Einstein was still adapting to his role as a public figure, it also represented a turning point for the scientist: He was suddenly learning how his high profile could not only draw attention to his work, but also to his beliefs.

In subsequent years, Einstein would continue his advocacy and fundraising to increasing effect for the Hebrew University — expressing pride at the opening of its Mount Scopus campus in 1925 and serving on its first Board of Governors — as well as for a number of other causes including civil rights, international cooperation and humanitarianism. Meanwhile, he’d refrain from further rash comments.

“In 1921, he’s still really finding his feet when it comes to talking to the press,” Rosenkranz says. “He becomes much more circumspect about what he says to the press after that. Eventually he learns how to use it for his own purposes and the causes he wants to advance — he uses his public persona.”