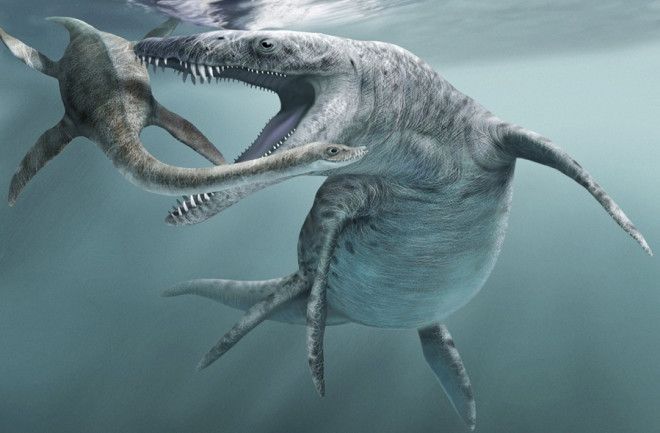 Liopleurodon ferox, a pliosaur much like those that once prowled the Jurassic Coast, hunts an unfortunate plesiosaur (above). Jaime Chirinos/Science Photo Library/Corbis

The southern coast of England has its share of idyllic coastal villages, picturesque coves and scones topped with clotted cream, but it’s got something else, too: Here be monsters.

The Jurassic Coast, a 95-mile stretch of rocky coastline, is England’s only natural World Heritage site. It’s a unique geologic treasure chest that gives us a look at our planet from about 65 million to 250 million years ago. It’s also arguably one of the best places in the world to get up close and personal with dinosaur and marine reptile fossils — including those of the ferocious pliosaur, “the scariest animal of all time,” according to geologist Richard Edmonds, Jurassic Coast’s earth science manager.

And perhaps the best news of all for budding paleontologists: Edmonds and his team not only want you to touch the fossils — they won’t mind if you pick them up and even take some home.

Full Tilt: What makes the coast World Heritage-worthy? It’s the rocks, explains Edmonds: “We’ve got 185 million years of Earth’s history in 95 miles of coastline. The rocks are tilted, dipping gently to the east. The oldest rocks are in the west, the youngest in the east, forming cliffs. Nowhere else in the world can you see the complete connected record of Triassic, Jurassic and Cretaceous.”

Walking with Dinosaurs: Visitors with at least 10 days to experience the Jurassic Coast can hike from end to end, enjoying expansive views and more than one pub along the way. Were your boots made for walking? Then keep going — the Jurassic Coast is part of the South West Coast Path, more than 600 miles of trail along some of England’s most dramatic scenery.  Icky History: You could make the case that modern paleontology was born on the beaches of the Jurassic Coast town of Lyme Regis. Although locals had collected unusual rocks for centuries, early 19th-century fossil hunters such as Mary Anning — credited with finding the first complete ichthyosaur skeleton — were among the first to recognize their scientific value.

Rock Out: Most fossil digs want the public to take a hands-off attitude. Not on the Jurassic Coast. “We’re unusual in that we say, ‘Come on down and have a go,’ ” says Edmonds. Public fossil hunting is allowed and even encouraged at numerous sites along the coast, though eager bone collectors are asked to follow a common sense code of conduct.  Big Mouth: Found on the Jurassic Coast by an amateur fossil hunter, the pliosaur skull on display at the Dorset County Museum in nearby Dorchester is 95 percent complete and nearly 8 feet long. Paleontologists believe the “sea serpent” had the biggest bite of any known animal.  Geo-Gardens: Once you’ve had your fill of rocks, check out some of the Jurassic Coast’s greener attractions — and thank the rocks for them. “All the active erosion creates fantastic habitats for plants and animals that thrive in disturbed soil, very unique beetles and moths and flowers, from about April through summer,” says Edmonds. “It’s all down to the underlying geodiversity.” Two must-visit spots: Durlston Head, a “limestone grassland full of orchids and butterflies,” according to Edmonds, and the Undercliffs, “the largest self-sown ash forest in England. It’s the nearest we get to a tropical rainforest.”  Building Character: When you’re ready to unwind from a day of fossil hunting or hiking, the coast is full of spots that offer more than a meal and a bed for the night. “There are also beautiful, historic towns and villages built of locally quarried stone with real character, such as Portland,” says Edmonds. Go: Stretching nearly 100 miles, the Jurassic Coast has plenty of entry points. Visitors flying into London can rent a car or travel by train or bus to one of the major gateway towns, such as Bournemouth in the east and Exeter in the west. Go Deeper: Become a Friend of the Jurassic Coast and sign up to conserve the rich but unstable coastline. Opportunities vary; watch postings on the website. Good to Know: The best seasons for fossil hunters to visit are late autumn and winter. “With winter storms and heavy rainfall, erosion is at its greatest,” says Edmonds. “You’ve got the sea just hammering the rocks below and landslides from above.” Just remember to stay on the beach. Coastal cliffs have claimed more than one would-be fossil collector. Edmonds points out another advantage: “On the beach, the sea does all the work for you, cleaning off the fossil.”