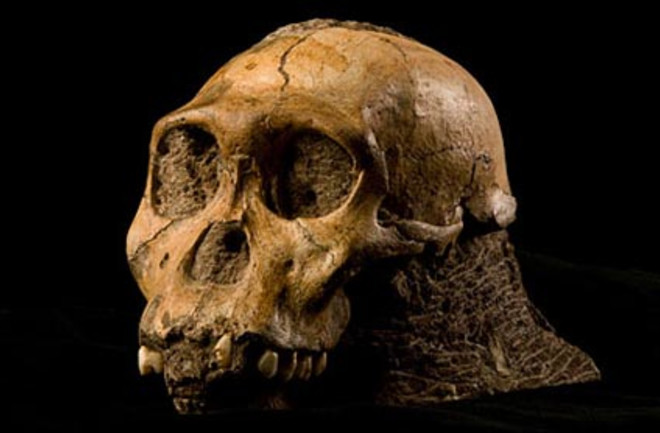 When I was 9 years old I desperately wanted to be a paleontologist, but sadly, daydreams of unearthing dinosaurs led to no significant fossil finds in my backyard. So I must confess unending respect for Matthew Berger, who, at age 9, quite by accident made a stunning scientific find. In the journal Science this week, Matthew’s father paleoanthropologist Lee Berger describes the fossils of a brand-new hominid species that they turned up in South Africa: Australopithecus sediba, which dates back to between 1.78 and 1.95 million years and could offer new hints about that era of human evolution.

Matthew was chasing his dog near a site where his father had long hunted for fossils when he tripped over the find. The bones belong to a pre-teenage boy and a woman estimated to be in her late 20s or early 30s; the individuals died at about the same time, and before their remains had fully decomposed, they were entombed in an avalanche of sediment and nearly perfectly preserved deep in the Malapa cave north of Johannesburg, South Africa [TIME]. As a result, Lee Berger says, the bones are in an astonishing state for their nearly 2-million-year age.

While such a find was bound to bring out the “missing link” cliches, we don’t know for sure where Australopithecus sediba would belong on the evolutionary tree with respect to us. “There’s no compelling evidence that this newly proposed species was ancestral to Homo,” remarks Bernard Wood of George Washington University in Washington, D.C. [Science News]. These bones date to a time when the genus Australopithecus was beginning to give way to Homo, our own. The New York Times reports, however, that while Berger’s team places its find within Australopithecus, not all anthropologists are sure it can be so easily classified.

For instance, the Australopithecus sediba arms are long like an ape’s, suggesting these hominids were competent tree climbers. But the hands are smaller, like ours. The boy’s skull is small, like Australopithecus. But his nose and cheekbones more closely resemble Homo. “They are a fascinating mosaic of features,” said Rick Potts, director of the Human Origins Program at the Smithsonian Institution. “It reminds us of the combining and recombining of characteristics, the tinkering and experimentation, that go on in evolution” [The New York Times]. Donald Johanson, the discoverer of Lucy (which is classified under Australopithecus), praised the find but says Berger’s interpretation is way off. He think the fossil is a variety of Homo.

The debate over these bones will go on and on. But while Lee Berger reaps his kudos, there’s one person who’s not receiving due respect: Matthew. In an insult to 9-year-old scientists everywhere, Science reportedly shot down Lee Berger’s request to list his son as a co-author. But the younger Berger is still left with good stories to tell. On Aug. 15, 2008, when Matthew called his father to look at the bones he had found, Dr. Berger began cursing wildly as he neared his son. The boy mistook his father’s profanity for anger…. “I couldn’t believe it,” Dr. Berger giddily recalled. “I took the rock, and I turned it” and “sticking out of the back of the rock was a mandible with a tooth, a canine, sticking out. And I almost died,” he said, adding “What are the odds?” [The New York Times].