Newly discovered planets are becoming ever smaller, lighter, and more familiar to us earthlings. 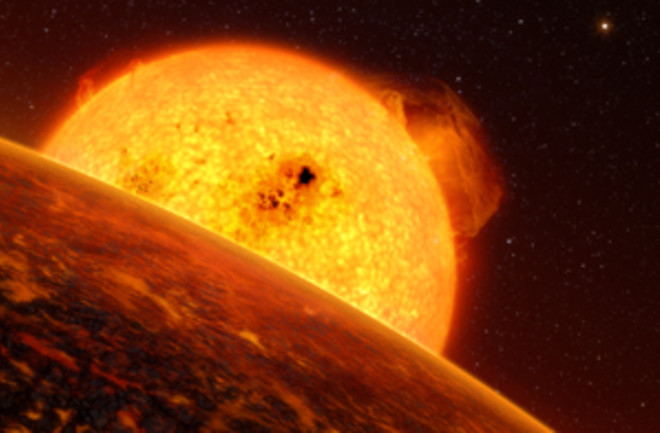 In the race to find planets around other stars, the grand prize would be to find a world like Earth orbiting a star like the sun—and astronomers closed in on that trophy in 2009. The first known exoplanets were huge and gassy. Then in February a European group led by Alain Léger of the Institut d’Astrophysique Spatiale in Paris and Daniel Rouan of the Paris Observatory used the Corot space observatory to find a planet less than twice the diameter of Earth, the smallest confirmed exoplanet ever seen.

Actually, “seen” is misleading. What Corot detected was the subtle, repeated dimming of the star Corot-7, 500 light-years away in the constellation Monoceros. This dimming, the team concluded, was caused by a planet orbiting so that it passed directly between the parent star and Earth, a so-called transit. “They’ve gone to great lengths to rule out any other explanations,” says David Charbonneau of the Harvard-Smithsonian Center for Astrophysics, a friendly rival of the Corot scientists.

The amount of dimming—less than one-thirtieth of a percent —tells the astronomers that their new world, provisionally named Corot-7b, is about 15,000 miles wide. Its “year” is just 20.4 hours long because it orbits so close to its star, with daytime temperatures nearing 2,000 degrees Fahrenheit. By September, Didier Queloz of the Geneva Observatory had weighed Corot-7b. Using the High Accuracy Radial Velocity Planet Searcher, or HARPS, at the European Southern Observatory in Chile, his team measured the planet’s gravitational influence on its parent star. The verdict: The planet is five times the mass of Earth and has about the same density, suggesting it is made of rock. In raw form, the new planet resembles our own world.

Other enticing discoveries soon followed. Planet hunter Michel Mayor of Geneva University trained HARPS on the nearby star Gliese 581, 20 light-years away, and in April reported that it, too, has a little planet, possibly smaller than Corot-7b. The same set of observations indicated that another of Gliese 581’s planets—this one seven times the mass of Earth—orbits at the right distance for liquid water, making it the first alien world that could plausibly support life. In October the HARPS scientists announced that about 40 percent of the sunlike stars they have examined have small, potentially Earth-like companions. Also that month, Queloz’s team described a second super-Earth circling Corot-7. “Low-mass planets are everywhere, basically,” Mayor’s coworker Stephane Udry declared.

And the real jackpot may not be far off. In March NASA’s Kepler satellite went into an unusual, Earth-trailing orbit looking for transiting planets. Its telescope is bigger than Corot’s, its orbit is more stable, and it is slated to scan 100,000 stars, while Corot is limited to 12,000. “If other Earths are out there,” says Kepler team member Charbonneau, “we’re going to find them.”