No atoms could escape the void within the cloud: “It’s like trying to swim upstream in a river whose current is faster than you.” 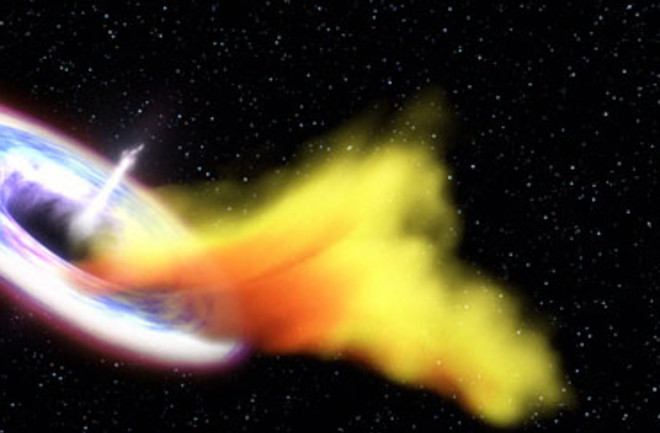 In June researchers at Technion, the Israel Institute of Technology, announced they had made an earthbound analogue of a black hole. Not to worry: Instead of a superdense object from which no light can escape, their more docile version merely prevents sound waves from getting out.

Constructing a sonic black hole was first proposed by Canadian physicist William Unruh nearly 30 years ago, but the Israeli team was the first to successfully create one. They cooled 100,000 rubidium atoms to a few billionths of a degree above absolute zero and used a laser to create a void in this tiny cloud. As the atoms, attracted to the breach, zipped across it at more than four times the speed of sound, they gave rise to a black hole effect. Under such conditions, no sound wave could travel against the flow of the racing fluid. “It’s like trying to swim upstream in a river whose current is faster than you,” says team member Jeff Steinhauer. The boundary between the subsonic and supersonic flows mimics a black hole’s event horizon, the point of no return.

The discovery could potentially provide a way to test Stephen Hawking’s prediction that a real black hole should slowly evaporate as it emits radiation generated in the quantum turmoil at its event horizon. A sonic black hole ought to act in the same way by releasing phonons, or packets of sound energy. Finding phonons would provide strong evidence that black holes “ain’t so black,” as Hawking likes to put it.