A new generation of ground-based telescopes and proposed space missions could soon reveal their secrets. 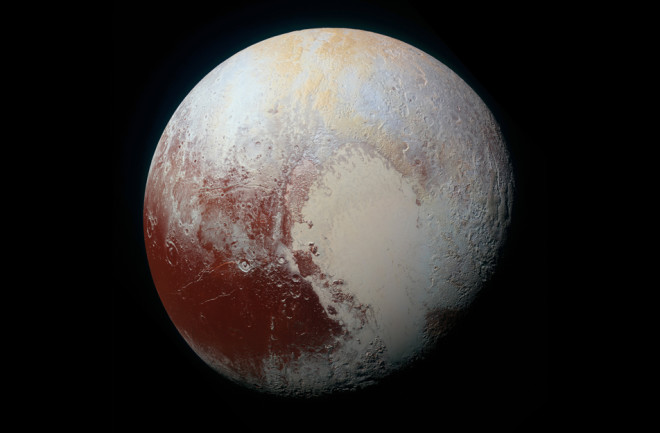 Deep in the outer solar system, billions of miles from Earth, lurks a realm of small, icy worlds called dwarf planets. Astronomers know relatively little about these dim and distant objects, but in recent years, new evidence has revealed that the tiny planets can hold a surprising range of features, from oceans and mountains to canyons, dunes and volcanoes.

Much of what astronomers know about dwarf planets comes from the NASA New Horizons spacecraft’s 2015 Pluto flyby. Pluto thrilled scientists with its towering mountain ranges made of ice. Its surprising geological complexity leaves astronomers eager to see the diversity of similar worlds in the Kuiper Belt — a donut-shaped region beyond Neptune packed with icy space rocks both large and small.

What is a dwarf planet? According to the IAU, a dwarf planet is a world orbiting the sun that’s big enough for its gravity to make round, but may “orbit in a zone that has many other objects in it.” For example, while planets like Earth are occasionally hit by space rocks, they’ve largely swept the debris out of their orbits. In contrast, a dwarf planet like Ceres orbits in the asteroid belt.

But the weirdest of these worlds sit far from the sun in the Kuiper Belt and share basic properties with Pluto. At the moment, these so-called Plutoids are mostly known from grainy images and via Earth-based detections of chemicals found on their surfaces.

That could soon change, thanks to the next generation of large telescopes under construction in places like Chile and Hawaii. These instruments should reveal surface details better than even the Hubble Space Telescope can provide.

“The wide variety of geologic expression on Pluto really points to the type of things other than ice mountains that we will be on the lookout for on other dwarf planets,” says Southwest Research Institute planetary scientist Alan Stern, who leads the New Horizons spacecraft team. “I think we’re going to find that the dwarf planets of the Kuiper Belt are every bit as heterogeneous as the terrestrial planets.”

Stern and fellow SwRI astronomer Carly Howett are also planning a potential new NASA mission that would return and orbit Pluto before journeying on to visit other large Kuiper Belt objects.

Here’s a rundown of some of the most potentially exciting and unexplored dwarf planets:

This artist's impression shows the distant dwarf planet Eris. New observations have shown that Eris is smaller than previously thought and almost exactly the same size as Pluto. Eris is extremely reflective, and its surface is probably covered in frost formed from the frozen remains of its atmosphere. (Credit: ESO/L. Calçada and Nick Risinger)

The dwarf planet Eris kick-started the debate over Pluto’s planethood after its discovery in 2005 by astronomers Mike Brown, Chad Trujillo and David Rabinowitz. Initial measurements showed Eris was larger in diameter than Pluto. And it even has a large moon like Pluto. It wasn’t until a decade later that better measurements gathered by the New Horizons mission revealed Pluto really is the largest known dwarf planet. But Eris is still bigger in one important way: its mass.

Eris’ greater density means it likely stayed warm longer than Pluto, thanks to radioactive heat, and could have kept any potential interior ocean liquid much longer under its icy crust. Pluto impressed astronomers with its recent surface activity, but it’s possible Eris may have held onto an ice-covered liquid ocean even longer.

An artist's impression of 2007 OR10. Its reddish hue may come from compounds known as tholins. (Credit: NASA)

Like other icy planetesimals in the Kuiper Belt, 2007 OR10 takes a wild ride around our solar system. A year on this dwarf planet candidate lasts 550 Earth-years and takes it almost as close to the sun as Neptune before plunging more than twice as far out as Pluto.

Scientists still aren’t sure about its diameter, but estimates put it at about two-thirds of Pluto’s. That leaves 2007 OR10 as the largest unnamed world in the solar system. (An online vote last year hosted by Brown and his team of co-discoverers suggested the name Gonggong, after a Chinese water god known for sowing chaos.)

Standing on its surface, the icy ground would look dark and red, like Pluto. Indeed, 2007 OR10 is one of the reddest worlds astronomers know of. That reddish hue hints at the presence of complex organic compounds astronomers call tholins. Carl Sagan first discovered tholins, which form when ultraviolet light hits carbon-rich molecules like methane, in the lab during an experiment aimed at replicating the conditions of early Earth. The tarry substance is found on Pluto and likely exists on worlds throughout the Kuiper Belt.

Research published in 2011 also showed that 2007 OR10 has a fresh surface covered in water ice. Astronomers think it’s evidence of cryovolcanoes, where slushy ice erupts from below the surface like lava.

This frigid world, named for a Rapa Nui god, is among the largest objects known in the Kuiper Belt. Surface temperatures on Makemake (pronounced MAH-keh-MAH-keh) match up well with Pluto’s, reaching as low as –230 degrees Celsius. A year on Makemake lasts about 300 Earth-years.

What little is known about Makemake’s surface suggests the world is covered in bright ices that are extremely cold, while its moon, MK2, is as black as charcoal. Some research has suggested the potential dwarf planet is also littered with pellets of methane as much as half an inch across.

Today, Triton isn’t a dwarf planet and it isn’t in the Kuiper Belt. Instead, it’s a large, icy moon of the planet Neptune with some seriously peculiar properties. Its orbit carries in the opposition direction of other large moons in the solar system, called retrograde motion, and it has a geologically active surface with strong signs of ice volcanoes.

Triton’s similarities to Pluto, as well as its orbit, lead astronomers to suspect that the moon initially formed as a dwarf planet in the Kuiper Belt and was later captured by Neptune. But whereas Pluto is thought to have an ancient ocean that froze over time, astronomers think Triton may still have a liquid-water ocean beneath its surface, thanks to Neptune’s intense gravity.

If true, that would make Triton one of the most habitable known worlds. And whereas NASA likely won’t have a mission to Pluto’s other far-flung cousins in the outer solar system in the near future, scientists are already seriously considering a mission dedicated to visiting Neptune. “We would learn a lot about dwarf planets with a mission to Neptune,” Stern says.

An artist's conception of Sedna, one of the reddest objects known in our solar system. (Credit: NASA/JPL-Caltech/R. Hurt)

Sedna is one of the reddest objects in the solar system — likely a sign of tholins — and it has one of the strangest orbits known. The potential dwarf planet takes roughly 11,400 years to circle the sun, meaning just about one year has passed there since the dawn of agriculture on Earth.

Sedna’s orbit leads some to rank it as the most important find in the region beyond Neptune. That’s because it’s unlikely that the world formed where it is now. One possibility is that a passing star may have knocked Sedna out of the Oort Cloud — a circumstellar cloud of icy space rocks orbiting far from the sun — and onto its current orbit. It’s hard to guess at what its surface looks like because astronomers have never seen a large object from that region up close.

“I call Sedna a fossil record of the earliest solar system,” Mike Brown, the Caltech astronomer who co-discovered Sedna, said in a Discover interview in 2006. “Eventually, when other fossil records are found, Sedna will help tell us how the sun formed and the number of stars that were close to the sun when it formed.”

It’s now been roughly two decades since Quaoar was discovered. And while this dwarf planet spans just half the diameter of Pluto, that doesn’t necessarily make it a less-interesting world. Right now, Quaoar is orbiting at about 42 astronomical units, where 1 AU equals the Earth-sun distance.

Quaoar is roughly the same size as Pluto’s large moon Charon, where the New Horizons mission recently revealed a stunning diversity of landscapes, from mountains to canyons, valleys, craters and plains. Charon is also covered in water ice and features a giant tectonic belt of canyons that stretches four times longer than the Grand Canyon and twice as deep. Astronomers suspect this gash, called Argo Chasma, formed when an ocean froze inside Charon and cracked the dwarf planet open like a soda can left in the freezer too long.

In the years since Quaoar’s discovery, astronomers have detected water ice there. And some scientists suggest it may have cryovolcanoes. Its relatively bright surface also hints that the world may have been geologically active in the not-too-distant past.

Orcus can be seen in the green circle at top right. (Credit: California Institute of Technology)

Some have called Orcus the “anti-Pluto” because of their many similarities but opposing orbits. Right now, Orcus is at its farthest point from the sun, while Pluto is near the closest point of its orbit. Both worlds eventually pass even closer to the sun than Neptune. And on Pluto, these close passes create a thin but temporary atmosphere.

Like Pluto and Eris, Orcus also boasts a large moon, named Vanth, which may be the third largest moon orbiting beyond Neptune. Vanth’s orbit clings to Orcus at an uncomfortably close 5,600 miles — the dwarf planet itself is just some 600 miles in diameter. (If Earth’s own moon orbited at a similar distance relative to size, it would sit several times closer than it does now.)

And these two objects seem to have very different surfaces. Whereas Vanth has a reddish hue common to Kuiper Belt objects, Orcus has a much lighter surface with signs of water ice. Is this system a slightly smaller version of the Pluto-Charon system? Or are these worlds something else entirely? Only a higher-resolution view will reveal the truth.