52 Alaskan Volcanoes in One Shot 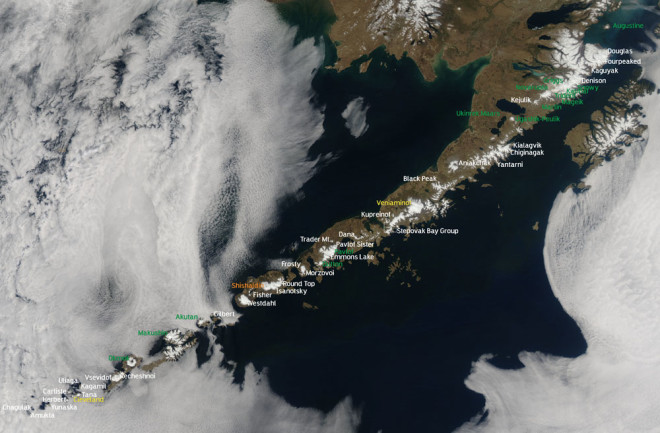 52 volcanoes across the Aleutian arc in Alaska, color coded for their activity status (see post for color key), seen on May 16, 2014 by Aqua/MODIS. Click here to see a larger version of this shot. Image: NASA Earth Observatory / Rob Simmon. It's not everyday you can see 52 potentially active volcanoes in a single image, but good conditions over the Aleutian Islands and Peninsula in Alaska allowed for just such a shot to be taken. The MODIS imager on NASA's Aqua satellite captured clear skies over many of the eastern Aleutian arc volcanoes, including one that is currently erupting -- namely Shishaldin. Now, the current activity at Shishaldin isn't impressive enough to show up well in this shot. However, if you click through to the big version of the image and zoom in on Shishaldin, you might be able to see its darker at the summit from the strombolian eruptions (in the form of lava fountains) occurring right now. I've color-coded the names of the volcanoes on the image for their official activity status (according to the Alaska Volcano Observatory), with green being Normal (nothing going on right now), yellow being Advisory (things are rumbling) and orange being Watch (likely erupting or close to it). Now, why are some volcanoes in white, including big ones like Aniakchak? Those fall into the "unassigned" category, which means we don't have enough or any monitoring information to give the volcano any status. Some of these volcanoes may have never had much monitoring equipment like seismometers installed on/near them or some, like Aniakchak, need to have theirs repaired after the harsh Alaskan winter. It is startling to see how many Aleutian volcanoes are without monitoring, especially with all those transpacific flights passing overhead.

{Special thanks to the NASA MODIS Rapid Response team for this image.}