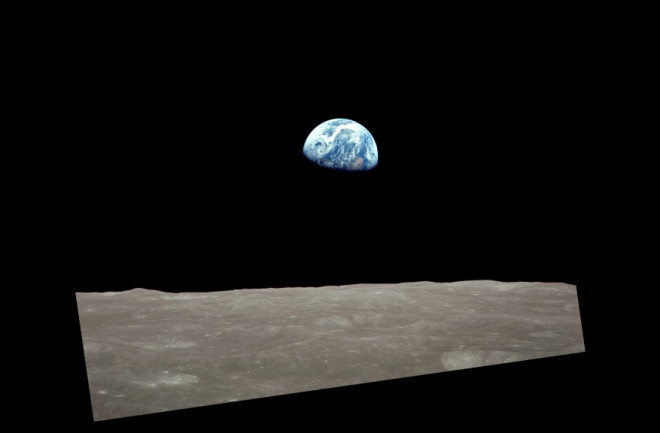 The photo that remade the world: Earthrise photographed by Bill Anders, at 16:40 UT on December 24, 1968. The foreground area of the moon is a little over 100 miles wide. This version has been color-corrected and rotated to a more natural orientation. (Credit: NASA)

Some two billion years ago, the first photosynthetic algae evolved the ability to respond to light—the brilliant Sun by day, the spectral Moon by night. Around 700 million years ago, primitive eye-pits appeared; then, during the Cambrian era, arthropod-like creatures gazed at the sky through true eyes, sensing the lunar rising and setting with their arthropod-like comprehension. So it continued, into the succeeding chapters of life featuring mammals, primates, hominins, and Homo sapiens, the last of them plotting the Moon’s movements and mapping the pockmarked terrain of Earth’s companion.

Then, 50 years ago, the perspective flipped. Apollo 8 took off on a figure-eight pattern around the Moon and, on December 24, 1968, three NASA astronauts peered out at the first Earthrise in the history of life. Most of the reminiscences now popping up across the media focus the Earth itself, seen gibbous and gorgeous from afar. But the true power of the image comes from its juxtaposition of two views never seen before: our blue planet, wrapped with air and water and hope, contrasted with the extraordinary gray desolation of the Moon.

To feel that power fully, you need to view Earthrise not as a still photograph but as an event, an experience immersed in its time and place. I had an opportunity recently to do just that at the American Museum of Natural History in New York. Carter Emmart, the director of visualization at the museum, has put together an Apollo 8 tribute that combines the original astronaut imagery with documentary clips about the United States in 1968 and, more vitally, detailed simulations of the Apollo 8 trajectory around the Moon. The recreation lets you watch the lunar landscape gliding by below, synced to the astronauts’ conversations with mission control, to bring back the transcendent totality of the moment when the Earth emerged from behind the Moon’s dusty rim.

Most people will not have the chance to visit the museum, but they can recreate much of the event drawing on resources that are readily available online–some of them created with Emmart’s assistance. He has provided a helpful list of those resources, which I’m including at the end of this post. But first I wanted to share some of his thoughts on reliving Apollo 8, along with the memorable words of the Apollo 8 astronauts themselves.

It seems bittersweet, remembering such a grand moment when we haven’t been back to the Moon since Apollo 17. Do you feel that way, too?

Emmart: People say, “We could have been to Mars by the mid-80s if we’d kept the direction going.” The truth is, the goal of going to the Moon was attacked by politicians as soon as it was announced. But really, those are minor details. Apollo 8 is a monument and it’s not going away. You can visit the Smithsonian and see the pieces of Apollo, but the real monument is in the sky. It reminds us that this world is a bridge to the universe. The Earth is just another orb, we are in the Moon’s sky just as the Moon is in ours.

The future is happening slower than we had hoped, but our capabilities with visualization allow us to go there another way.

'An idealized recreation of the Earthrise moment, courtesy of NASA Science Visualization Studio. This is part of a <a href='https:

An idealized recreation of the Earthrise moment, courtesy of NASA Science Visualization Studio. This is part of a full video. (Credit: NASA)

What did you learn about the Earthrise moment as you set about recreating it?

Emmart: That image has such legacy. When you think of Apollo, you think of that image. Before, the Moon was something in a landscape, romantic and mythological. Then suddenly we were there, above this desolate landscape – “magnificent desolation” as Buzz Aldrin said. The lifeless Moon below the Earth, where everything living that we know is. I also wanted to be able to watch the Earth in real time as the Apollo 8 crew fired their rocket engine for translunar injection, to watch the Earth shrink.

The Apollo program was all about going out there. The lunchboxes were about the Moon. Kennedy’s speech was about the Moon and the stars. But when we got there, we looked back, and that really changed things. It ignited the environmental movement. The Earth has never been without strife, but 1968 was a particularly difficult period. With Apollo 8, we looked back at all of the yelling and screaming and everything that was dividing us, and saw the counterpoint: This is our place, it is beautiful, and it is alive. It’s in stark contrast to the nonliving Moon.

You talk about Earthrise as a spontaneous moment. What do you mean by that?

Emmart: NASA was detail-oriented about everything, down to the split second, but the Earthrise photos just kind of happened: “Yeah, I’ll take a picture of it.” It just connected on such a human level. When the astronauts searched for something appropriate to say [on their Christmas Eve broadcast], they chose Genesis from the Old Testament, one of the deepest common origin myths. That was a surprise even to the flight controllers. Gene Kranz [the NASA flight director] said he had tears in his eyes, because it was so vast.

Looking back at the Earth was really profound. We knew what our planet was, but we didn’t really know it until we saw it.

The sense of desolation really comes across in the astronauts’ words and in the visuals when you watch the full Earthrise unfold.

Emmart: I don’t want to be a contrarian and say , “Listen to what they said about the Moon, it’s terrible!” but it is a reflection on that. With the power of visualization I have felt that desolation looking at it. All three of them [on Apollo 8] talked about how the Moon was beautiful, but it had a stark, untouched quality. Lonely. Not a very inviting place to live or to do work. I think NASA was freaking out [about the gloomy tone of their comments]. But I’m glad NASA didn’t govern their reactions. They reacted in a very human way.

How did that sense of desolation affect the way they perceived the Earth?

Emmart: You hear the astronauts talk about how the blackness of space had a personality about it. [Apollo 17 astronaut] Gene Cernan said, roughly, “You see the sun and it’s blazing, it’s too bright to look at, and then you turn to the side and that light just goes out into the blackness that swallows it up.” It’s a blackness that is almost beyond conception. And then the light hits something! When it hits the Moon, that is charcoal grey. Now take that charcoal gray and turn that the white of the clouds of Earth and the blues of the ocean and the greens of the vegetation and the tawny browns of the desert.

This is an artist’s palette, a palette you don’t see anywhere else in the solar system. The Earth sparkles with life. Then you look at the Moon. It’s outside our magnetosphere, it’s got soil that’s ground up glass, its a really tough place. That’s the important message of the Apollo 8 picture. The mission was about beating the Russians too the Moon, but then it turned into a surprise Kumbaya moment. This is us, all of us, in the picture together, whether we like it or not.

You can relive the Apollo 8 experience, accurate down to the exact orientation of the spacecraft and the moments of the conversation. (Credit: NASA/SVS)

You can relive the Apollo 8 experience, accurate down to the exact orientation of the spacecraft and the moments of the conversation. (Credit: NASA/SVS)

The Apollo 8 astronauts should get the last word, so here are their own spontaneous reactions to looking at the Moon, contrasted with the vibrant azure spirit of the Earth.

Frank Borman: The moon is a different thing to each one of us. I think that each one of us — each one carries his own impression of what he’s seen today. I know my own impression is that it’s a vast, lonely, forbidding-type existence, or expanse of nothing, that looks rather like clouds and clouds of pumice stone, and it certainly would not appear to be a very inviting place to live or work.

Jim Lovell: My thoughts are very similar. The vast loneliness up here of the moon is awe inspiring, and it makes you realize just what you have back there on Earth. The Earth from here is a grand oasis in the big vastness of space.

Bill Anders: I think the thing that impressed me the most was the lunar sunrises and sunsets. These in particular bring out the stark nature of the terrain, and the long shadows really bring out the relief that is here and hard to see at this very bright surface that we’re going over right now…The sky up here is also rather forbidding, foreboding expanse of blackness, with no stars visible when we’re flying over the Moon in daylight.

FURTHER RESOURCES that allow you to share the Apollo 8 experience:

The OpenSpace software was designed for the type of trajectory information that describes the split second accuracy necessary to describe space missions accurately. The website has the open source download, description, and videos including tutorials.

Researchers at NASA-JPL and the Ames Research Center have built a wonderful intuitive browser that can also display 3D views and model output for 3D printing of the Moon.

NASA Goddard has a fantastic browser of temporal data about the Earth as well. You can go straight to the imagery if you like.

Carter Emmart worked with a group of students to use photogrammetry to breathe new visual life into the old Hasselblad imagery of the Moon.

We still have the full Apollo 8 crew alive, the only full crew left. They were honored last month at Chicago’s Museum of Science and Industry with host and author Robert Kurson, who wrote their story recently in the book Rocket Men. There’s a video record of this unique memorial event.