Spartacus was real, and so were female gladiators. 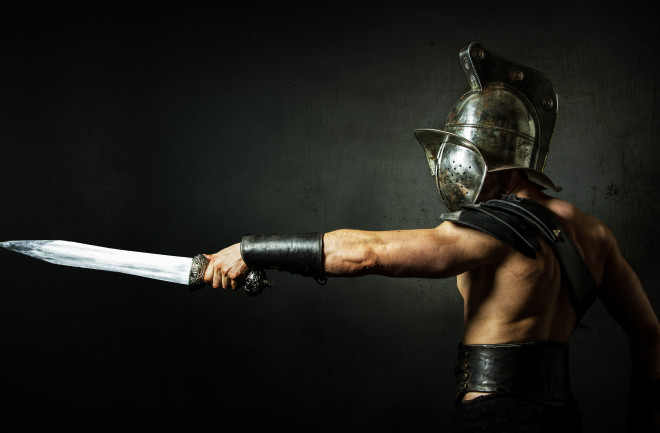 Gladiators, as we all know from films and TV, were professional armed combatants who competed during the Roman Empire. Despite the fact that many were slaves or prisoners, being a gladiator was considered a somewhat glamorous, albeit short-lived, profession. Gladiators fought in huge arenas and their match-ups were highly anticipated. The public would be informed about details of upcoming shows, including names of competitors, types of combat, and of course the date of the event. Bills advertising the competitions would be placed on public buildings and outside of houses, as well as sold on the street. And the pre-game hype worked: Contests between fighters drew up to 50,000 Roman spectators at a time, making gladiatorial combat the most popular form of entertainment in ancient Roman society.

Although the kill-or-be-killed era of professional sports is centuries in humanity’s past, this bloodthirsty period spawned legends that still live on in popular culture, thanks to countless sword-and-sandals epics on the big and small screen. But Hollywood interpretations — and misinterpretations — make it hard to parse the truth of what really went down in the arena. Here, then, are five things we do know about the age of the gladiator.

Spartacus Was A Real Person

Perhaps the most famous gladiator of all time, Spartacus lived from 111 BC to 71 BC. His fame, though, is derived less from his gladiatorial achievements and more from the fact that he led the largest and most successful slave revolt in the history of the empire. With an army of about 100,000, Spartacus and his rebels posed a serious threat to Rome. Roman leader Marcus Licinius Crassus realized the opportunity this presented to further his own power and influence and moved to crush Spartacus’ forces. Crassus failed in trapping Spartacus in Bruttium, (modern day Calabria), but succeeding in killing 6,000 of Spartacus’ men. Spartacus escaped that battle, but was eventually defeated by Crassus in Lucania. The gladiator’s death marked the downfall of his army, and Crassus and the other Roman forces hunted down and killed Spartacus’ remaining followers. Even in defeat, the gladiator's courage in fighting against the powerful echoed through the centuries. Spartacus has been viewed ever since as a brave and skilled leader — willing to fight courageously against oppressive rule.

Researchers who studied 2,000-year-old skeletal remains of 67 ancient gladiators were able to test them for certain elements, including calcium and zinc. Using the scientific method of isotopic analysis, they reconstructed the diets of the gladiators and discovered that they ate a plant-based, carb-rich diet that included barley and beans, but very little animal protein. They also drank calcium supplements made from charred plants. Unlike many modern-day vegetarians who follow the diet out of health or ethical motivations, gladiators evidently did it for pragmatic reasons. Eating a lot of simple carbs caused gladiators to boost subcutaneous fat, which helped increase their survival chances in battle. Because of this fatty cushion, their blood vessels and nerves were better protected when they were cut in fights.

Just as modern sports boast athletes who specialize in certain positions, so too were there several different types of Roman gladiators — each an expert in their weapon and possessing a specific skill set. Regardless of their specialty, however, the main job of a gladiator was to fight against other gladiators, not wild animals. That unhappy task fell to two different classes of fighters. First was the bestiarii, and to call them “fighters” is a bit of a stretch. These were typically prisoners of war or condemned criminals who were literally thrown to the beasts. They had no chance of survival, as they had little or no training, nor were they given weapons to defend themselves. On the other end of the spectrum were venatores, who engaged in staged hunts of wild animals, such as lions, elephants, leopards and bears. Venatores did have training and were provided with spears. They were also outfitted with leather bands to protect their arms and legs, and sometimes wore iron chest plates or body armor.

Gladiators lived at training schools called ludi, which were prison-like barracks. As the slaves of wealthy Romans, gladiators were considered property, an important investment to be preserved. As such, there were certain aspects of their living conditions that were superior to that of some Roman citizens. For instance, ludi generally held to high standards of hygiene, food, and medical care. Gladiators were fed three meals a day and had access to hot and cold baths. Fighters drilled in specific techniques, depending on the type of gladiator they were preparing to become, and they trained in groups with an instructor of that particular style. Some of the larger training schools had arenas where spectators could watch, so the gladiators could get used to performing before a crowd. Gladiators fought between three and five times a year, and even though each fight wasn’t to the death, the lifespan of these ancient fighters seldom extended past the mid-twenties. However, that wasn’t dramatically different from the life expectancy of the average working class Roman, which was only 30.

Female Gladiators Were A Thing

Although not common, female gladiators did exist. Referred to as gladiatrix in modern language, ancient texts referred to them as ludia or mulieres. Unlike most of their male counterparts who were often forced into gladiator life, it’s believed that gladiatrix chose to fight — for financial gain, honor or fame. Although evidence to support their historical existence is not vast, it’s compelling. Written and archeological records have survived, including a marble relief, and funerary items. Further substantiating the history of female gladiators is a law that barred free women from participating in arena games, if they were under 20 years old. The creation of this law is seen as inadvertent recognition of the fact that women had been participating already. (However, no law prohibited female slaves from participating.) In 200 AD, Emperor Septimius Severus made it illegal for any woman to engage in arena events. Male gladiators, however, kept hacking away at each for another two centuries before the last recorded gladiatorial contest occurred in 404 AD.