The $200 million Spaceport America broke ground in June not far from the restricted airspace of the White Sands Missile Range. 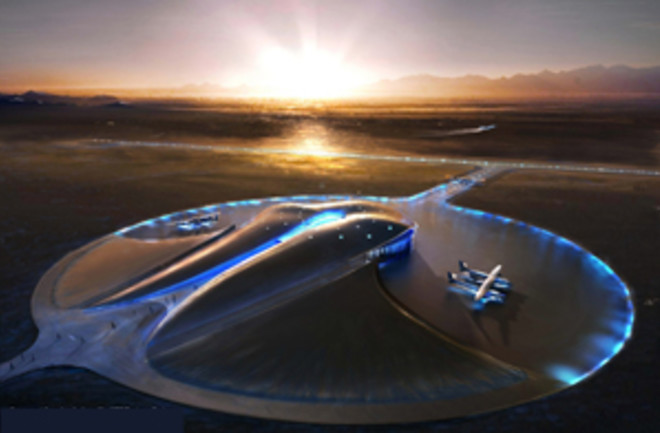 Dawn at Spaceport America -- an artist's view. | Courtesy of Vyonyx

Drive an hour northeast of Las Cruces, New Mexico, then another 25 miles along a dirt road, and you can watch the construction of Spaceport America—the nation’s first commercial hub built specifically for spaceships. Right now the facility’s 10,000-foot runway is being formed out of a mountain of gravel, but by 2011 it is expected to host the takeoffs and landings of space-tourism flights operated by its anchor tenant, Virgin Galactic.

The $200 million project, underwritten by the state of New Mexico, broke ground in June not far from the restricted airspace of the White Sands Missile Range. The location was chosen carefully. It is unhampered by commercial jet traffic and benefits from the same advantages that drew the U.S. Army there: abundant clear weather and a 4,700-foot elevation, which drops the cost of reaching Earth orbit by up to $90 million, compared with launching at sea level.

“Space tourism isn’t the spaceport’s only purpose,” says Steven Landeene, its executive director. Private companies like Lockheed Martin are already sending up rockets from the facility’s vertical launchpads, located several miles from the runway. Other sites around the United States also support commercial launches, but these are mostly carved out of existing government facilities.

“Dreams are becoming a reality,” Landeene says. He envisions a day when Virgin Galactic’s $200,000 flights will come down in price and start to change the way we fly on Earth, with business travelers reaching Asia or Europe in less than two hours.