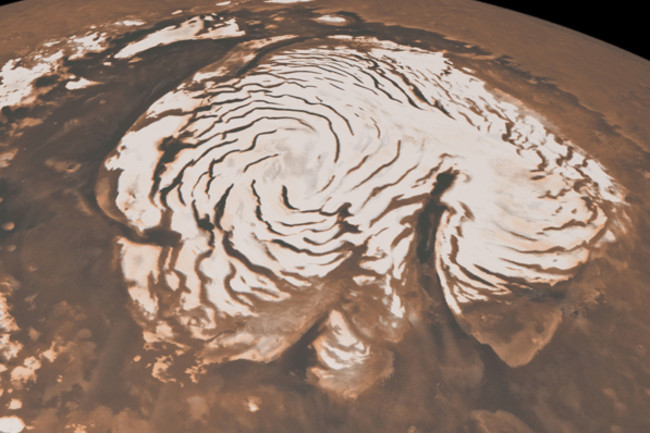 Mars has a wispy atmosphere, with just 0.006 times the surface pressure of Earth. But that is enough to have sculptured one of the most dramatic landscapes in the solar system, University of Texas geophysicist Jack Holt reported in May. The ice cap of Mars’s north pole is marked with enormous gorges; the largest, Chasma Boreale (jutting upward at right), is deeper and wider than the Grand Canyon. For four decades scientists debated how these canyons formed. Using the Shallow Radar instrument aboard NASA’s Mars Reconnaissance Orbiter, Holt was able to peek beneath the ice’s surface for clues; in particular, the radar could pick out differences in electrical reflectivity between overlying layers, showing how the ice built up over time. The data reveal that as the northern ice cap grew, its changing contours altered local wind patterns. Over millions of years, the weak but persistent winds ate away at the surface ice and dust, carving out Chasma Boreale in all its glory.