Since 1985, an exhibition company has recovered artifacts from the Titanic wreckage. But some relics weren’t recovered 12,500 feet below. 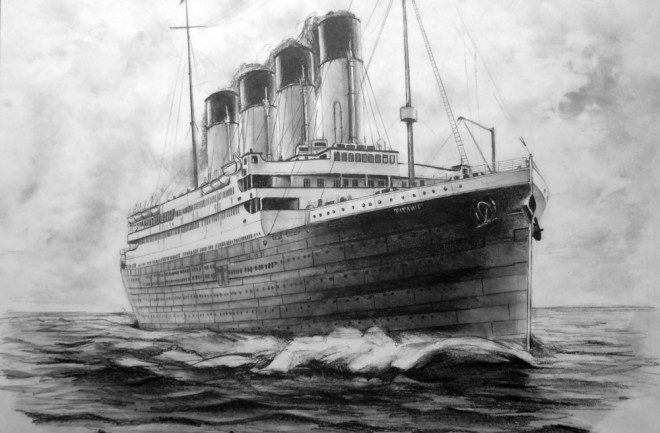 In April 1912, the RMS Titanic was on its maiden voyage across the Atlantic from England to New York City when it struck an iceberg and sunk within hours. Only about 700 of the ship’s 2,224 passengers survived. For many decades, the location of the ill-fated ship was a mystery. In 1985, a joint French-U.S. expedition located the wreckage about 350 nautical miles off the Canadian coast.

The Titanic rests about 12,500 feet below the surface. An exhibition company received sole permission to salvage remains from wreckage. The company has taken seven trips and resurfaced more than 5,500 artifacts ranging from handbags to clocks. Traveling expeditions, in places like the Luxor Hotel in Las Vegas, display these relics.

Many of the interesting items, however, come from people who didn’t go down with the ship. Survivors and witnesses have also offered amazing artifacts. Here are four fascinating finds.

1. The Photograph of the Iceberg

When the Titanic struck the iceberg, 17-year-old Bernice Palmer of Canada and her mother were on the Carpathia, an ocean liner heading from New York to Europe, where the two planned to take a cruise of the Mediterranean. The Carpathia, however, received a distress call from the sinking Titanic and raced toward the wreckage.

Palmer had received a handheld Kodak camera for her birthday. When her ship arrived at the scene, she stood on deck and took a picture of the iceberg that tore into the Titanic. She also took several pictures of survivors as they boarded the Carpathia and received warm blankets and clothing.

The Carpathia did not have enough food for the 700 Titanic survivors it brought aboard, and it returned to the U.S. Palmer quickly sold her film to a photo publishing agency for $10. The agency developed Palmer’s pictures and profited from publishing the image of the iceberg. In 1986, Palmer donated her camera to the Smithsonian Institution.

After the Titanic sank, both the U.S. and the U.K. held inquiries to assess who was responsible. Some U.K. politicians criticized the U.S. for holding a Congressional inquiry, because the White Star Line, a British corporation, owned the Titanic. Congress contended the Titanic was destined for an American port and carried passengers from many countries, including U.S. citizens.

Transcripts of the Congressional hearings are still available and include lists of who was aboard, as well as survival rates for each class-level. The inquiry revealed the Titanic did not have enough lifeboats for all the passengers. When the ship began sinking, the captain ordered all of the 413 women and 115 children aboard to go first into the lifeboats. Not all made it in, and 49 percent of women and 65 percent of children in third-class perished.

The inquiry also exposed the multiple warnings the Titanic operator’s ignored about the danger ahead. Just one hour before the wreck, they received a warning from another ship, “We are stopped and surrounded by ice.”

The Titanic operator responded, “Shut up. I am busy. I am working Cape Race.”

When the Titanic first crashed into the iceberg, some passengers and crew understood the accident was serious. They put on their life vests and hoped for a spot in one of the life boats. Others seemed to underestimate the damage. Survivors tell of how the band continued to play music, which confused the scene and made it seem festive at first.

Some people went back to their rooms to collect valuables. Others sat in the lounge and watched as pajama-clad passengers mixed with those still in their evening attire.

The Carpathia, however, quickly realized the gravity of the situation when the distress call from the Titanic came through. Frank Blackmarr, a physician from Chicago, was on the Carpathia and provided medical attention to survivors lifted from the lifeboats.

Blackmarr kept a life vest that one of his Titanic patients had worn. Blackmarr eventually donated the vest to the Chicago Historical Society, which later gifted the artifact to the Smithsonian Institute.

For some passengers, the Titanic was a pleasure cruise. They were Americans finishing a tour of Europe, or Europeans looking to see the U.S. or Canada. They enjoyed fine amenities including meals with multiple courses and well-considered wine pairings. For others, particularly those in third-class, the Titanic was their ride to a new, and hopefully, a better life. Their accommodations and meal offerings reflected their modest fare prices.

Survivors saved several menus detailing the meals of the day before the disaster, or they were collected from bodies during recovery.

One passenger, Ruth Dodge of San Francisco, had a first-class menu in her purse when she and her son were helped into a lifeboat. Her husband, Henry Washington Dodge, later secured a spot in one of the last lifeboats. The menu Ruth brought home eventually sold at auction.

A waterlogged third-class menu survived, although the person who carried it did not. The menu was retrieved from the body of a man immigrating to Detroit. It is on display at the Titanic Historical Society in Massachusetts.