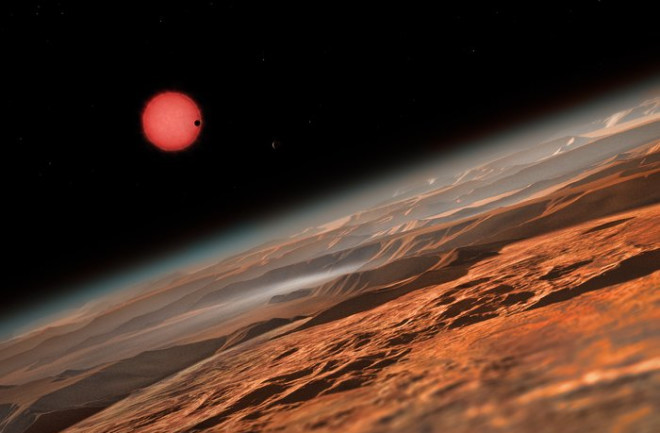 Sometimes the long shots pay off. Case in point: They latest findings from Belgian astronomer Michaël Gillon from the University of Liege and his TRAPPIST telescope. The TRAnsiting Planets and PlanetesImals Small Telescope is designed to search for exoplanets where no one thought they existed.

Gillon and his team expanded the search for Earth-like exoplanets to small, relatively cool stars known as dwarfs, which were thought to be too small to have spawned planets from their accretionary disks.

And TRAPPIST hit gold not once, but three times in its first mission. Looking at a dwarf star 40 light-years away, now known as TRAPPIST-1, the team found three Earth-like exoplanets in its habitable zone — the area around a star where liquid water is possible and organic life could be found.

This is the first time any exoplanets have been discovered orbiting a star so small and dim, they say. The team published its findings Monday in the journal Nature.

Researchers point TRAPPIST toward dwarf stars that are relatively close to our planet, but are too small to find with other observatories. This limits the number of places they can look but also vastly narrows down their search. They comb the infrared portion of the electromagnetic spectrum looking for dips in the brightness of a star, a telltale signal that a planet might be crossing in front of it.

By monitoring the frequency and amplitude of changes in a star's brightness, they can determine if the fluctuations are caused by a planet or something else. In this case, Gillon and his team concluded that three separate planets were causing TRAPPIST-1's brightness fluctuations. They say the trio of planets are around the same size as Earth, but may be orbiting up to 100 times closer to their home star. Their orbital periods are short, ranging from a day and a half for the closest candidate, and up to 73 days for the furthest exoplanet.

Because TRAPPIST-1 is so small — it's barely larger than Jupiter — and cool, its habitable zone is much closer than larger, hotter stars. Researchers say the closest planet receives only four times as much radiation as Earth, while the furthest likely gets even less than us. All three planets are tidally locked, meaning they don't rotate, and portions of the planets are permanently locked into day or night.

There may be areas straddling the boundary between the night and day where temperatures are ideal for life, however. To determine if life exists on TRAPPIST-1's exoplanets, Gillon and his team will search for biosignature gases — metabolic byproducts such as oxygen and methane — in the planets' atmospheres. Gases in a planet's atmosphere alter light in specific ways, which serves as a unique signature that can be decoded by researchers on Earth.

And planets orbiting dwarf stars make ideal candidates for detecting biosignatures, says Julian de Wit of MIT, a co-author of the paper. The stars typically targeted in the exoplanet search are bright, which makes them easy to spot, but also obscures key details about the planets orbiting them. TRAPPIST-1 is cooler, so researchers should get a closer look at the planets orbiting it. By viewing the planets in a range of wavelengths, including ultraviolet, radio and infrared, de Wit says they will glean key information about the content of their atmospheres.

This picture shows the Sun and the ultracool dwarf star TRAPPIST-1 to scale. The faint star has only 11% of the diameter of the sun and is much redder in color. (Credit: ESO)

"When a planet transits, (when it passes in front of its star relative to a faraway observer), its atmosphere absorbs a fraction of the star’s light," Gillon wrote in an email to Discover. "The amplitude of the absorption varies with wavelength and depends directly on the composition and physical conditions of the planet’s atmosphere. So, if we observe the planets’ transits with a sufficiently powerful instrument, we can measure precisely how the effect varies with wavelength, and thus constrain the planet’s atmospheric properties.

For the very few temperate — and potentially habitable — Earth-sized exoplanets detected until now, the atmospheric signals are of much lower amplitude and none of the existing or near-future astronomical instruments are able to measure them. But that is not the case for the TRAPPIST-1 planets, thanks to the tiny size, low temperature, and proximity of the star that all maximize the planetary signals."

The team is already using observatories such as Hubble and Spitzer in its search for biosignatures, de Wit says. He is most excited for the next generation of telescopes set to come online in the next few years, including the James Webb Space Observatory — a collaboration between NASA, the European Union Canada — and the European Extremely Large Telescope.

These next-generation observatories should give researchers the ability to scan exoplanet atmospheres in far greater detail, yielding a wealth of information about what the planets look like. There around 1,000 stars like TRAPPIST-1 within the range of current and forthcoming telescopes, says de Wit, which means there around 1,000 more locations for his exoplanet-hunting team to target.

The next phase of the TRAPPIST project will expand the team's search capabilities even further. The current telescope is only able to view the 50 brightest dwarf stars near us, but a new telescope under construction, called SPECULOOS, will feature upgraded capabilities to examine many more of them.