20 Things You Didn't Know About... The Future

What happens at the end, when we contact the alience, and the Big Answers revealed 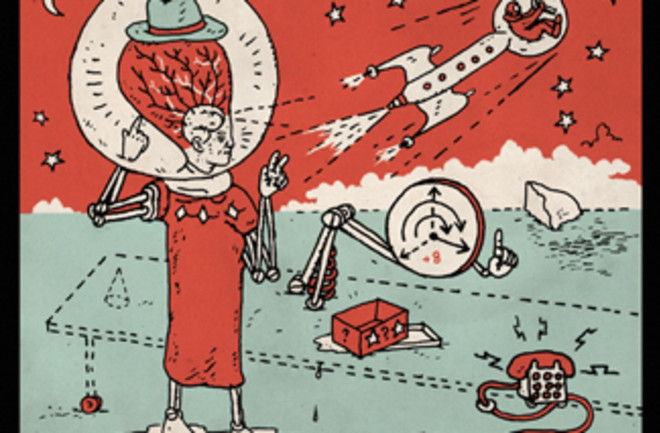 1  When the future arrives, we won’t recognize it at first. What we think of as just more of the present will turn out, only after weeks of intensive study, to have been the future.

2  To keep this from happening again, humanity will adopt “reality saving time” and set its clocks forward eight hours.

3 We will be disappointed by how many people in the future think pajamas are acceptable public outerwear.

4 Further blurring the line between “sleeping” and “awake,” increasingly turbulent economic times in the late 21st century force millions of people to rent out their unconscious minds for data storage. A Connecticut man is sued for describing to his therapist a strange dream that turns out to be the intellectual property of Jerry Bruckheimer.

5 2107: Artificial intelligence aces the Turing test by becoming so uninteresting that it can’t be distinguished from human intelligence. Lame dinner party conversation can now be conducted 300 percent more efficiently.

7 By 2175 scientists have discovered the answers to all our greatest questions. They are: “No,” “Yes,” “Yes, but not the way we thought,” “Like two hands clapping, only quieter,” and “At the back of the closet, in the old shoe box.”

8 Apple’s latest iPhone, the NanoNano, is so small that it can be accidentally inhaled, periodically leaving friends embarrassing voice mails that consist entirely of heavy breathing. That is, when it can get a signal.

10  In 2205 humans reconquer Earth and hire polymer engineers to replace melting glaciers with plastic substitutes that are identical to the originals in every way, except that they aren’t wet or cold.

11 Fortunately, polar bears can’t tell the difference because they have been extinct for 150 years.

12 Missing glaciers are just the beginning of our problems. Earth starts making a strange knocking sound, then breaks down entirely.

13 In the otherwise dull year 2327, mankind successfully contacts aliens. Well, technically their answering machine, as the aliens themselves have gone to Alpha Centauri for the summer.

14 Desperate for help, humans leave increasingly stalker-y messages, turning off the aliens with how clingy our species is.

15 The aliens finally agree to equip Earth with a set of planet-saving carbon neutralizers, but work drags on as key parts must be ordered from a foreign supplier in the Small Magellanic Cloud.

16 The job comes in $3.7 quadrillion above estimate. Humanity thinks it is being taken advantage of but isn’t sure.

17 4441: Interstellar travel is perfected, allowing us to reach the edge of space. Past the edge? Millions of light-years of unpainted drywall.

18 In the 504th century, humans give rise to a trendily named new species, Homo dakota madison. As predicted, craniums expand enormously, although the brains inside stay the same size. It will be an exciting time to be in the hat business.

19 Meanwhile, the dwindling number of Homo sapiens resentfully move to an old-species planet, to be cared for by androids programmed to feign interest in stories about prostates and half-remembered episodes of Perry Mason.

20 Ten billion years from now, our hyperevolved descendants gather to watch the scheduled heat death of the universe. Unfortunately, the event is preempted when time turns out to be cyclic.

Elliott Kalan won an Emmy in 2009 for his work on

The Daily Show with Jon Stewart, where he is a staff writer.