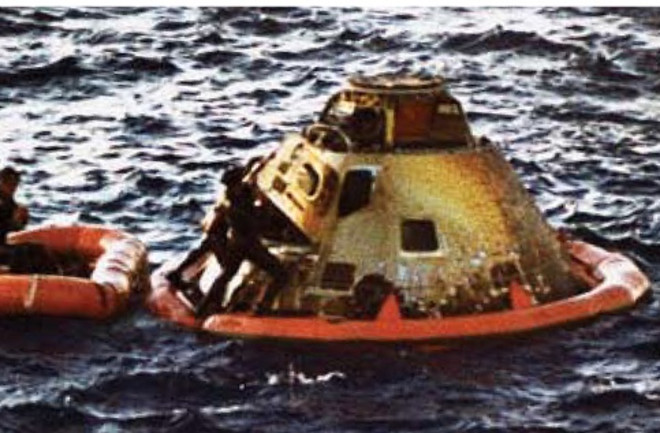 1  Yuri Gagarin, the first man in space, died when he crashed his MIG-15 on a training mission. An outdated weather report failed to warn of low clouds.

2  Up to 200 people died when an R-16 rocket exploded at the Baikonur Space Center on October 24, 1960. It was kept secret until the Soviet Union collapsed.

3  On a lighter note, at least he wasn't blown up: Slated to follow Gagarin into space, G. G. Nelyubov got into a drunken fight with an army patrol, refused to apologize, and was demoted and airbrushed out of the official cosmonaut team photo.

5  In 1967 Vladimir M. Komarov became the first person to die on a space mission when parachutes on his Soyuz 1 capsule failed to open during descent.

7  The Soyuz program has not had a single fatal accident since then. NASA, however, has lost two of its original four-shuttle fleet, with 14 deaths.

8  Maybe NASA should wait until after Groundhog Day: The fire on Apollo 1(January 27, 1967), the explosion of the shuttle Challenger (January 28, 1986), and the disintegration of Columbia (February 1, 2003) all occurred during the same calendar week.

9  Gus Grissom nearly drowned in 1961 when his Liberty Bell 7 capsule sank after splashdown in the Pacific.

10  Six years later, along with Ed White and Roger Chaffee, he died in the Apollo 1 launchpad fire.

12  In 1975 the U.S. half of the Apollo-Soyuz crew choked on toxic nitrogen tetroxide propellant during descent because pilot Vance Brand failed to deactivate the craft's thrusters.

13  Give or take a thousand: Prior to the Challenger disaster, NASA officials put the risk of a shuttle accident at 1 in 100,000. Physicist Richard Feynman found the odds were more like 1 in 100.

14  The Challenger accident was the 25th shuttle flight, Columbia the 114th.

15  All seven Columbia astronauts died, but hundreds of nematode worms, carried in canisters to study the biology of weightlessness, survived.

16  Pretty much like the suburbs: According to a persistent rumor, in 1996 an astronaut couple tested 10 sex positions in space and found that six were impossible without an elastic belt, an inflatable tunnel, or a third partner.

17  NASA denies the story, noting the flight in question had an all-male crew.

18  Meanwhile, Italian researchers found that testosterone levels temporarily drop in male astronauts in space, along with a decrease in sexual desire.

20  Floating like a tin can: The International Space Station orbits amid 11,000 pieces of man-made space junk orbiting at 18,000 miles per hour.