From super-sniffers to electricity detectors, animals have an array of impressive sensory capabilities 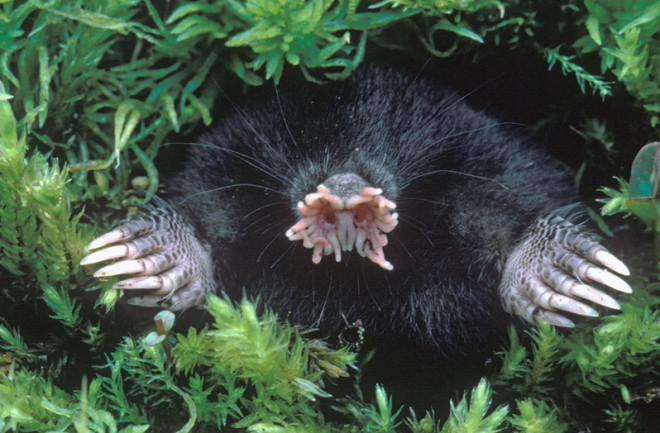 They’re not nature’s cutest critters, but star-nosed moles are among the most sensitive. Dembinsky Photo Associates/FLPA/Minden Pictures

1. Think of the term alligator skin as a compliment: It’s extraordinarily sensitive to minute changes in vibration, which helps locate prey.

2. Alligators are touchy, but the platypus is more the feely type. The only mammal with electroreception, it uses sensors in its bill to detect electrical impulses sent out by prey in murky water.

4. Elephants, too, are acutely aware of vibrations. They use seismic activity generated by their trunks and feet to communicate with one another about predators, territory and mating preferences.

5. Star-nosed moles have 22 tiny trunks containing a total of nearly 100,000 nerve fibers — six times as many touch receptors as on a human hand. As the mole burrows, the tentacles sweep ahead like a high-speed broom, faster than a human eye can detect.

6. Above ground, wolves have a sense of pitch. Not wanting to lose their voice in a howling chorus, they pick their own unique note.

7. Seals are notable for their whiskers, which can detect the hydrodynamic trail of fish swimming up to 600 feet away.

8. Sensing dinner is one thing, but animals from white-crowned sparrows to deer can sense if their diet is lacking in important nutrients. They’ll crave food containing amino acids that can’t be produced or stored by the body.

9. On the topic of bodies, a catfish’s is wrapped in taste buds. It’s like a swimming tongue that helps detect the flavor of potential prey from all directions.

10. Back on terra firma, chemoreceptors that detect chemical changes and provide a sense of taste cover an earthworm’s entire body.

11. Snakes’ tongues do more than taste: They help track prey. Their forked tongues pick up scent molecules that the animal transfers, via specialized ducts in the mouth, to the Jacobson’s organ, which can detect where the scent’s source is located.

12. Rats and common moles can smell in stereo with independently acting nostrils. Researchers are putting their talents to use in Africa detecting land mines and other explosives.

13. Up to 40 percent of a shark’s brain is dedicated to sense of smell. No wonder some experts believe they can sniff out prey that’s a third of a mile away in the open ocean.

14. Parasitic worms also use scent to find hosts. By identifying odors attractive to these parasites, researchers may one day develop traps for worms that pose major health risks.

15. Sight, not smell, is a raptor’s key sense. Even while diving at speeds of 100 mph or more, falcons can spot prey thanks in part to a reduced number of blood vessels in the retina. Since the vessels scatter light, having fewer of them creates extremely sharp images.

16. Scallops are no falcons, but some scientists believe they’re able to distinguish between light and dark with as many as 100 eyes on the edge of their mantle. A reflective surface on the back of each eye focuses light onto two retinas to form an image.

17. “Four-eyed fish,” Anableps anableps, really have just two eyes, but each one is partitioned: The top keeps a lookout for above-surface predators while the bottom watches underwater.

18. Not only do jumping spiders have eight eyes positioned to create nearly 360-degree vision, but some species can detect ultraviolet radiation, which facilitates mating. (Mood lighting, anyone?)

19. Worker honeybees navigate using rings of paramagnetic iron oxide in their abdomens that swell or shrink depending on outside magnetic changes, allowing the insects to find their way home by following changes in the Earth’s magnetic fields.

20. Jewel beetles have sensors that detect infrared radiation from forest fires as far as 50 miles away. The beetles use recently scorched areas for mating. Now that’s putting the “sense” in sensual.