The would-be superpower advertises its technical and economic prowess with a giant flying billboard. 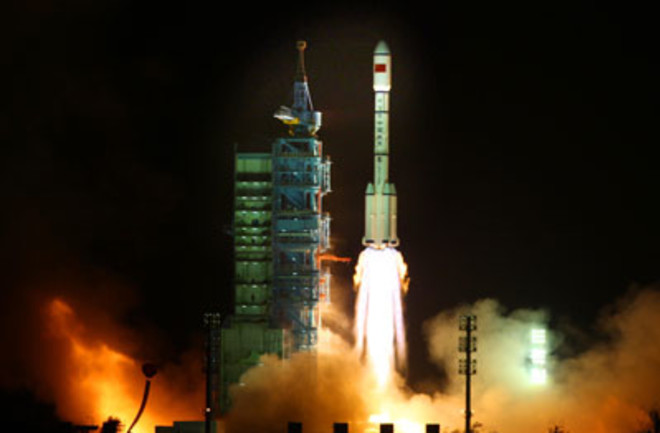 On September 29, the flames of a Long March-2FT1 rocket lit the night sky over the Gobi Desert as China launched its Tiangong-1 space lab, a first step toward the construction and deployment of an orbiting manned space station by 2020. That happens to be the year when the International Space Station will be retired and sent on a fiery trajectory into the Pacific Ocean. If everything proceeds according to schedule, China will then be operating the world’s only space station.

China’s decision to build its own space station is partly a consequence of America’s refusal to allow China to participate in the International Space Station—initially because U.S. officials felt China had little to contribute, and later because of concerns that China was interested in military applications in space. The launch of Tiangong-1 marks a major milestone in China’s ambitious manned space program, begun in 1992. China put its first human in space in 2003 and conducted its first space walk five years later. In 2010 the country launched an unmanned mission to orbit and map the moon, a possible precursor to a manned lunar mission.

China plans to use Tiangong-1 (“heavenly palace”) to conduct science experiments and to practice space docking, an essential skill for assembling space station components in orbit; a successful first docking took place in November. It will also serve as a celestial billboard, says Joan Johnson-Freese, a professor at the U.S. Naval War College and an expert on the Chinese space program. “It’s a big economic advertisement,” she says. “If they can do space technology, they can make high-technology consumer goods.”