A dried river bed reveals the path that a 15-foot dinosaur once took. 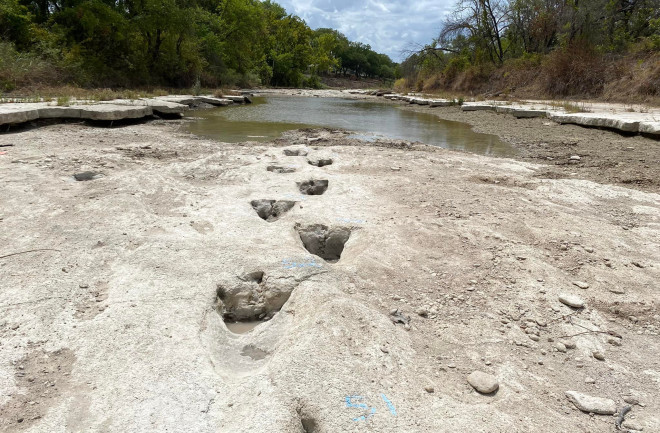 Sunken ships, lost cities and human remains from decades ago have surfaced during the droughts in the American South West and Europe. However, the most recent drought discovery dates back 113 million years.

Excessive drought in Texas has revealed more dinosaur tracks in a dry river bed in Dinosaur Valley State Park. The park is famous for its multiple sets of tracks that people can visit and explore for themselves. However, these recently exposed tracks hadn’t been seen since 2000. Extensive mapping and recording efforts were underway by park volunteers like Paul Baker and experts like Glen Kuban.

The tracks at Longe Ranger Trail likely belonged to an Acrocanthosaurus — a bipedal carnivorous dinosaur, much like the Tyrannosaurus rex. This particular dinosaur was about 15 feet tall and could have weighed several tons.

As the Paluxy River dries, the tracks — typically covered under water and sediment — resurfaced. However, rushing waters are likely to cover the dinosaur tracks in sediment after periods of rain. Park officials say that if the rain reburies the dinosaur tracks, it will help preserve and prevent them from weathering away.

The park is home to tracks from an Acrocanthosaurus and a Sauroposeidon — a long-necked dinosaur. Researchers mapped these footprints in the past to try and understand how these two species interacted with each other. Check out the video below.