We’ve been launching strange stuff into space since it became possible. 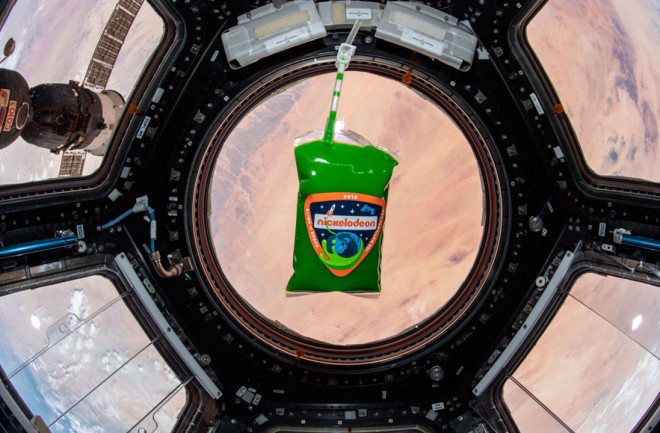 Humanity has long been fascinated by space. In our quest to expand our understanding of the universe beyond Earth and communicate with extraterrestrial life, we’ve sent a bizarre slew of items and creatures into the final frontier — including music, animals, text messages, pizza, Craigslist ads, human remains and a car, among other things. Because why not? But of all the strange things blasted off into space, what did we send to learn something (and not just because we can)?

Once an internet obsession, astronauts were slimed in 2020 in the International Space Station with the satisfyingly gooey DIY toy. Nickelodeon sent about two liters of slime to the space station for astronauts to play games, toss slime-filled balloons, and make slime bubbles to understand how a fluid that isn’t water behaves in the absence of gravity. The findings of the experiment could impact how liquids are handled in space and could influence plant watering on the space station, carbon dioxide and wastewater processing, along with life support systems on future deep space missions.

Tissue chips are tiny, complex bioengineered devices containing human cells in a 3D matrix that mimic the structure and function of human organ systems, such as the heart, lungs and kidneys. First launched into space in 2018, scientists use tissue chips to study how drugs and diseases affect the human body in space and to understand the long-term impact of microgravity on health. The technology could eventually allow astronauts to bring along personalized tissue chips, which could be used as a way to keep them healthy on deep space missions through monitoring changes in their bodies and by testing possible treatments.

Scientists have been sending jellyfish into space since the early 90s to test the effects of weightlessness on their development as they mature. The first mission that blasted jellyfish into orbit in 1991 sent over 2,000 jellyfish polyps contained in flasks and bags filled with artificial seawater. To induce the polyps to swim freely and reproduce, astronauts injected chemicals into the bags aboard the Columbia space shuttle — by the time the mission ended, over 60,000 jellyfish were living in space! And it turns out that the space jellies had a lot of difficulty trying to swim in normal gravity when they returned to Earth: they were experiencing extreme vertigo.

In 2007, researchers from Arizona State University sent a sample of salmonella, one of the most common causes of food poisoning, into space to understand how bacteria reacts to zero-gravity. Frighteningly, the bacteria became even more virulent in space — troubling news for future space colonies.

Tardigrades, also known as water bears, are microscopic, nearly indestructible creatures found in many different environments on land or sea. The tiny creatures can survive high levels of radiation, extreme temperatures, nearly an entire decade without water and exposure to chemicals that are harmful to other forms of life. Since they can live through just about anything, scientists figured they’d see what happens to them in space in 2007. The tardigrades returned to Earth perfectly healthy, becoming the first animal to survive open space.

Golden-orb weaver spiders enclosed in a container with food and light were sent to space to observe how they would orient themselves in a gravity-free environment. The researchers photographed the spiders’ webs every five minutes as overhead lights switched off and on every twelve hours to simulate daylight. Just last year, they found that gravity is the most important orientation guide for spiders when it comes to web building. The direction of light, however, works as a sort of “back-up system” in the absence of gravity. The question of why this happens is still unanswered, so there might be more spider astronauts in the future.

A team of scientists launched freeze-dried samples of mouse sperm into space back in 2013, leaving them in storage for over nine months aboard the International Space Station. Space doesn’t have an atmosphere to protect DNA from the sun’s radiation, and when DNA is damaged, it can prevent offspring from coming to term and can cause birth defects and diseases. But that didn’t happen. The freeze-dried sperm returned safely to Earth and led to healthy mice pups after being rehydrated.

The Japanese rice fish, also referred to as medaka, has transparent skin — perfect for helping researchers investigate the effects of microgravity on marine life, and more specifically, the effects on their bones. Studies indicate that the activation of osteoclasts, a type of cell that breaks down bone tissue, are what cause the decrease in bone density that astronauts experience in orbit. However, the way they decrease bone density is still not understood. Through the medaka, a species that’s been used in space studies since 1994, scientists are working to uncover this mechanism in hopes of developing a treatment for osteoporosis for space travelers and the rest of us on Earth.

Ah, yes, the great frog flight of 1970. NASA launched two bullfrogs in their own spacecraft, dubbed the Orbiting Frog Otolith, or OFO 1, to study the impact of space travel on motion sickness. Scientists chose to use bullfrogs for because its inner ear is very similar to that of humans. They implanted electrodes into the frogs’ thoracic cavities and vestibular nerves within the ear to record data on the effects of weightlessness. The bullfrogs orbited Earth for six days, and the experiment was successful; the electrodes in their thoracic cavities showed the frogs acclimated just fine, and their vestibular systems returned to normal.

[Correction: This article erroneously stated that 90,000 honeybees were sent to space in 2019. Instead, they were studied in a Martian simulator at the LunAres Research Station in Poland. We apologize for the error.]