Your Body, Your Choice: Fight for Your Somatic Rights 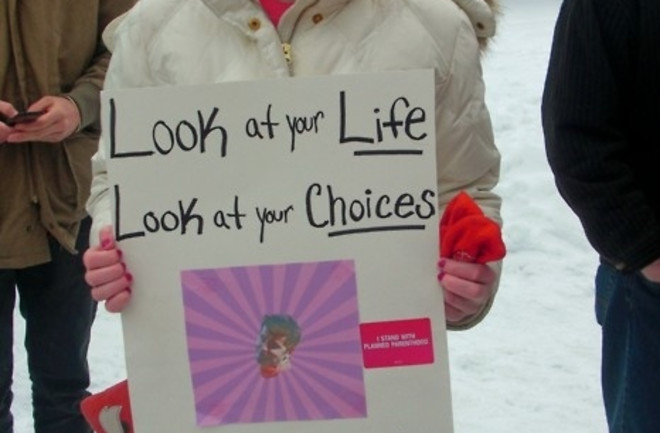 “My body, my choice.” We hear that slogan constantly, but what the hell do those four words mean?

Many of us have one or two political issues surrounding our bodies that get us fired up. Many of you reading this right now probably have some hot-button issue on your mind. Maybe it’s abortion, or recreational drug usage, or marriage rights, or surrogatepregnancy, or assisted suicide, or sex work, or voluntary amputation, or gender reassignment surgery.

For each of these issues, there are four words that define our belief about our rights, “My body, my choice.” How you react to those words determine which side of any of those debates you are on. That’s just the thing, though – there aren’t a bunch of little debates, there is just one big debate being argued on multiple fronts. All of these issues find their home in my field of philosophy: bioethics. And within the bioethics community, there is a small contingency that supports a person’s right to choose what to do with their body in every single one of those examples. Transhumanists make up part of that contingency.

If you are pro-choice on abortion or think that gender reassignment surgery is an option everyone should have, you agree with transhumanism on at least one issue. Many current political arguments are skirmishes and turf battles in what is a movement toward what one might call somatic rights. In some cases the law is clear, as it is with marriage rights or drug usage, and the arguments are over whether or not to remove, amend, or change the law. Other cases are so ambiguous that the law is struggling to define itself, as with surrogate pregnancy and voluntary amputation. And sooner or later (I’ve given up on guessing time-frames), instead of merely arguing over what we’re allowed to do with the body we’re born with, there will be debates about our rights to choose what kind of body we have. By looking at the futuristic ideas of genetic engineering and robotic prosthetic technology, we can understand how transhumanism maximizes the “my body, my choice” mantra.

We have a lot of laws about what you can’t do with your body. On the other hand, think about how many different things can be defended with “It’s my body, I’ll do what I want!” Why do we say that? The answer seems painfully obvious: because we’re the only ones who know what it’s like to have our body and it’s probably the only thing we really, truly own. No one can take your body without also taking your life – which as it turns out, is a great way to put your money where your mouth is when you’re a philosopher. Like any good philosopher, however, my job is to examine the painfully obvious. In part, because if it’s all so damn obvious, then why does every lawmaker, religious leader, and jerk with a megaphone think they have a right to tell you or me what to do with our bodies? Is it just jealousy?

Let’s say we live in the future and I have the option to get a robot body and genetically modify my brain to make myself smarter, kinder, and happier. My guess is many people would be very upset if I was traipsing around with a glorious, glistening body made of heretofore unheard of alloys with a genetically tricked-out brain. I would be a magnificent testament to science and engineering. I would be happier, healthier, and smarter. So what possible justification would the paternalists of the world have for telling me I can’t upgrade my physical body?

There are three responses:

In each case, the actual right to your body is deferred to some third party, either the paternalists, the hypothetical children, or unreasoned authority. Transhumanists and like-minded bioethicists recognize that somatic rights are individual rights. That means that, unless they harm someone else directly, you should be able to do as you please. I find it amazing that for all of our amendments protecting freedom of religion, and assembly, and the press, we lack an amendment protecting freedom of bodily self-determination.

A rough and ready version of what freedom of bodily self-determination might look like has three key principles:

Because you have the right to do something, you are also responsible for the results of that decision. For example, if you choose to do drugs, you are culpable for decisions you make while under the influence of those drugs. If you choose to modify your body and, later regret the decision, the fault is no one’s but your own. These simple concepts have a huge impact on not only current laws around issues like abortion, sex assignment surgery in infants, and assisted suicide, but possible future ones surrounding technologies like genetic enhancement, anti-aging medicine, cognitive enhancing drugs, designer babies, voluntary prosthetic augmentation, and cybernetics. As technology advances, we will have more and more ways to choose what to do with our bodies.

As the politics of the body continue to generate controversy, it is important those on the side of choice and freedom of bodily-determination recognize where their allies are. Transhumanists and liberal bioethicists, yes, but also feminists, marriage rights proponents, sex worker advocates, those who would end the drug war, libertarians, and the LGBT community. These groups are fast coming to the conclusion that it is important we cherish our basic biological freedoms and protect our somatic rights.

That means arguing for pro-choice body issues now, in the present. And for those out there who find themselves pro-choice on some issues (e.g. gay marriage and abortion) but anti-choice on others (assisted suicide and genetic engineering), you’d best reevaluate why you have conflicting stances. You shouldn’t. If you disagree with me, I’d love to hear your thoughts in the comments below.

Image by ginger gal via buzzfeed.

More From Discover
Mind
Why We Are Fascinated With Serial Killers
Technology
Text-To-Image AI: Powerful, Easy-To-Use Technology For Making Art – And Fakes
Planet Earth
What Coffee Means to 6 Different Countries
Mind
Nostalgia and Thinking About the Future Can Be Good For You
Health
Could COVID-19 Be Changing Who We Are?
The Sciences
Was Nefertiti Egypt’s Leading Lady Before King Tut?
Recommendations From Our Store
My Science ShopDiscover STEM Kits
My Science ShopDiscover 2022 Calendar
My Science ShopStrange Science
My Science ShopElements Flashcards
Shop Now
Stay Curious
Join
Our List