X-Rays From a Particle Accelerator Reveal a Hidden Van Gogh 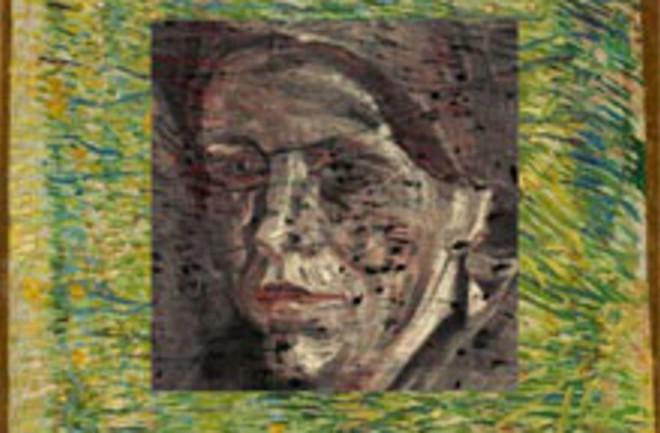 In a neat marriage of science and art, researchers used x-rays from a particle accelerator to reveal an early portrait of a woman by Vincent Van Gogh, which the impoverished artist later painted over with a meadow scene. The hidden image

bears a striking resemblance to a series of somber portraits the artist produced in the Dutch town of Nuenen, where he composed "The Potato Eaters," completed in 1885 and regarded as his first major work [Los Angeles Times].

An earlier analysis using conventional x-rays had shown the rough shape of a head hidden beneath the surface of a painting called "Patch of Grass," but provided no details. To get a clearer image, the researchers used high-intensity x-rays from a particle accelerator in Hamburg, Germany to compile a two-dimensional map of the metallic atoms on the painting beneath "Patch of Grass."... Knowing that mercury atoms were part of a red pigment and the antimony atoms were part of a yellow pigment, they were able to chart those colors in the underlying image. "We visualized — in great detail — the nose, the eyes, according to the chemical composition." [researcher Joris]

Experts in van Gogh believe he often over-painted his work, doing so on about a third of his early works. Art historians think van Gogh painted the peasant's image while staying in the Dutch village of Nuenen in 1884 or 1885 [Telegraph].

He later moved to Paris, and recycled the canvas in 1887 when he covered the woman's face with a brighter and more Impressionistic scene. The new imaging technique, described in a paper in the journal

istry [subscription required], is an improvement over art historians' previous method of using standard x-rays to look for another picture hidden beneath a painting's surface, a process which results in a fuzzy black and white image. However, the new technique isn't likely to become a common practice, as it requires the use of particle accelerator. Image: TU Delft