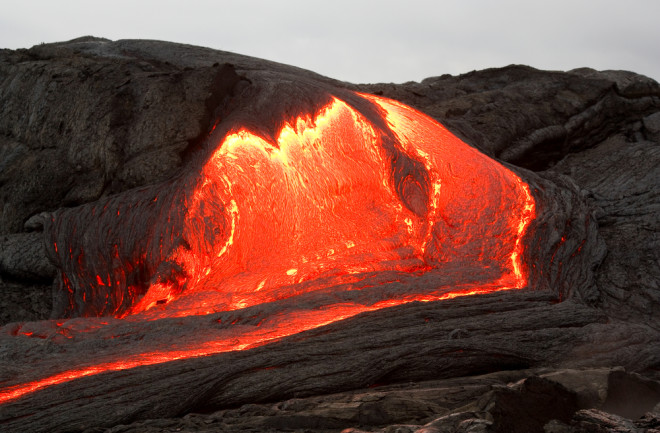 Drones are helping scientists understand Earth's lava flows, which could tell us more about ancient Mars. (Credit: Shuttershock) Lava flow: an unstoppable destructive force that burns pretty much everything in its path. When a volcano erupts, it’s important that people in surrounding areas have adequate time to evacuate. To provide those crucial extra hours, or minutes, researchers are using drones to improve hazard predictions, and perhaps tell us something about life on ancient Mars. Drones allow volcanologists to map large areas quickly, cheaply and, most of all, safely using magnetometers and thermal cameras. Scientists are even flying drones through eruption plumes to study the chemical composition of Earth's hot, steamy belches.

In August 2014, Mt. Holuhraun began pouring a burning carpet of lava onto the pristine highlands of northern Iceland. The lava kept flowing into 2015, with no signs of stopping. In all, it turned out to be Iceland’s largest lava flow in 230 years, covering more than 85 square miles. “Nobody lives there, and so it didn't attract a lot of notice, but geologically, it's extremely significant,” says Christopher Hamilton, a planetary scientist at the University of Arizona’s Lunar and Planetary Laboratory. In the midst of the eruption, Hamilton, volcanologist Einat Lev of the Lamont-Doherty Earth Observatory, and their colleagues headed to the mountain with a small flock of drones. With their quads in tow, the team took flight to collect data from Mt. Holuhraun to see how lava flows respond to tiny changes in topography—like steep terrain versus flat terrain.

(Credit: Christopher Hamilton) “I am thinking about how lava interacts with its environment: any kind of obstacles or pre-existing roughness,” says Lev. “If it goes over a 20-degree slope, then it doesn't really care about anything. But if it goes over a 1- or 2-degree slope, then it's going to be a lot more sensitive to the little features.” The ground around Mt. Holuhraun sloped downward at an almost imperceptible angle. That slight angle paired with the landscape’s small bumps caused a slower lava flow. That shallow slope also allowed Lev to get some really high-resolution data, which she says will eventually lead to better, more detailed hazard prediction models. But making those models for volcanoes around the world will require detailed maps of their surrounding terrain and that’s another place drones can be useful. If local volcanologists can use drones to improve maps of the terrain around a volcano, then they can be better prepared to predict where and how quickly the lava will flow after an eruption, according to Lev. Drones can also fly over lava flows and update those maps during an eruption, letting volcanologists update those hazard predictions nearly in real-time.

A drone shot of the lava flows. (Credit: Lev Hamilton)

What Happened on Mars?

The data captured at Holuhraun may help scientists like Hamilton understand another world entirely. He’s applying what we've learned from drone flights on Earth to reconstruct hydrothermal systems on early Mars. Iceland’s dry, barren northern highlands make a great analogue for early Mars. When Holuhraun’s lava flowed into Iceland’s largest river system, it led to changes in the landscape: new hot springs, lakes and streams. After ground studies of the microbial populations of those bodies of water, biologists discovered what might turn out to be a new species of heat-loving microbes called thermophiles. Hamilton says recent—within the past 20 million years recent—lava flows have occurred on Mars, which begs the question: Could Mars’ lava flows have created a similar environment to Iceland’s? To answer that, he studied how the hydrothermal system created by the volcano changed as the lava flow grew and as it cooled. Hamilton’s team has repeated its research flights once a year to map changes in the lava flow, the temperature of hydrothermal vents and hot springs, and where water went as the lava cooled. Those results, in turn, may help Hamilton draw some conclusions about how–or whether–life could have found a foothold on Mars’ briefly warm, wet environment.