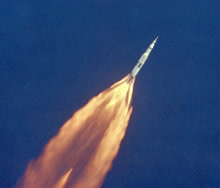 A Virginia physicist and entrepreneur pled guilty yesterday to violating arms control laws by selling information on rocket technology to China, which prosecutors say will aid China in its space program. The scientist, Quan-Sheng Shu, is a naturalized U.S. citizen born in Shanghai; he's also an expert on cryogenics and liquid hydrogen rocket systems.

According to the Justice Department, China intends to use the technology to send space stations and satellites into orbit, as well as provide support for manned space flight and future lunar missions from its new Hainan space facility [The Virginian-Pilot].

An FBI press release regarding Shu's case notes that an arm of the People's Liberation Army is involved in the Hainan project. Shu, who is the president of a high-tech company called AMAC International Inc., pled guilty to two counts of violating the federal Arms Control Act and one count of bribing Chinese officials, and faces up to 25 years of jail time and fines of up to $2.5 million. Sentencing in the case is scheduled for April 6, 2009. China officials responded to news of Shu's day in court with indignation.

"This so-called report about China stealing outer space technology from the United States is a sheer fabrication made out of ulterior motives that is doomed to failure," foreign ministry spokesman Qin Gang told journalists. Mr Qin refused further comment. China routinely denies allegations that it is involved in espionage against other nations [AFP].

As part of a plea deal, Shu agreed to fully cooperate with federal officials as they continue their investigation.

Shu, who remains free on $100,000 bond pending sentencing, declined to comment after leaving the courtroom. His attorney, James Broccoletti, said his client wishes to make clear that this was not an espionage case. "He doesn't want to be known as a spy because he's not," Broccoletti said. "In the grand scheme of things, his was a minor role" [The Virginian-Pilot].

Broccoletti argued that the case involves space technology and not national security, and said Shu's role was minor because he didn't manufacture anything that was shipped to China. Related Content: 80beats: After a Successful Spacewalk, Chinese Astronauts Return Home 80beats: Virginia Physicist Charged With Selling Space Technology Secrets to China Image: NASA