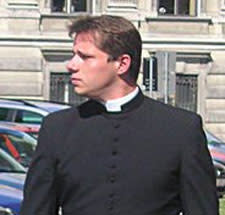 don't generally have sterling reputations as upstanding citizens---at least as far as the general public is concerned. That's why it may come as a surprise that the Vatican has published an essay that redeems computer hackers and even compares hacker philosophy with Catholic theology. In his article

Hacker mentality implies a joyful application of intelligence to problem solving, rejecting the concept of work as repetitive, burdensome and stupid, Spadaro wrote. Hacker ethics rejected a capitalistic, profit-oriented approach to work, eschewing idleness but favoring a flexible, creative approach that was respectful of the human dimension and natural rhythms, he said.

In addition, hacker philosophy fosters creativity and sharing, and is both committed yet playful. "Under fire are control, competition, property. It's a vision that is ... of a clear theological origin," writes Spadaro

. He argues (rather vaguely) that many of these characteristics are also, as odd as it may seem, characteristics of Catholic philosophy. Lest ye think that this priest is praising Anonymous

and the like, he cautions that hackers are very different from crackers, and even quotes technology writer Eric S. Raymond

: "Hackers build things, crackers break them." Spadaro says that Christian hackers see their work as "a form of participation in the 'work' of God in creation," echoing J.R.R. Tolkien's concept of sub-creation

: That humans can't help but create (in Tolkien's case, tell stories) because we are ourselves created beings, echoes of a much larger creator. And Spadaro cites the words of California's Homebrew Computer Club member Tom Pittman too: "I as a Christian thought I could feel something of the satisfaction that God must have felt when He created the world." Spadaro does acknowledge that hacker and Catholic philosophies aren't entirely congruent: Hackers reject hierarchical authority, and the Catholic Church is founded on it. I guess that's why we'll probably never see a hacktivist Pope. Related Content: Discoblog: Sinned Lately? There’s a Vatican-Approved App for That