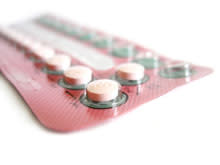 Remember how all the Prozac we've been flushing through our systems (and our sewers) was entering the water supply and messing with the fish? Well, a new argument claims that this is precisely what's going on with men who're having a little trouble in the fertility department. And just who is making this rather dubious claim? None other than the Pope himself. According to His Eminence, the demon birth control is finding its way from the urine of loose women into the otherwise-pure systems of unsuspecting males, robbing them of their baby-making mojo. Pedro Jose Maria Simon Castellvi, president of the International Federation of Catholic Medical Associations, stated that the pill "has for some years had devastating effects on the environment by releasing tonnes of hormones into nature," and as a result "[w]e have sufficient evidence to state that a non-negligible cause of male infertility in the West is the environmental pollution caused by the pill." Never mind that experts say the hormones in the Pill lose all their "feminine" effects after being metabolized by the (presumably female) Pill taker—this is Pope Science! The Holy See isn't about to let small things like medical evidence stand in his way. Though, thankfully for mankind, the rest of us feel somewhat differently. Related: Disco: Prozac Ocean: Fish Absorb Our Drugs, and Suffer For It RB: Drugonomics: Cash-Strapped Americans Taking Fewer Prescription Meds RB: Does the Pill Keep You from Finding a Good Mate?Image: iStockPhoto