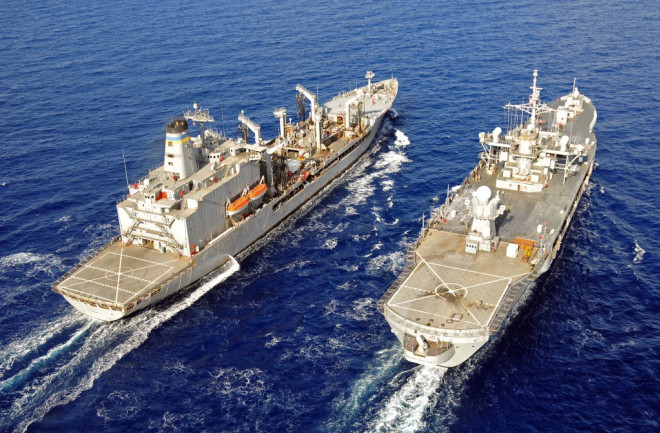 A Navy fuel ship replenishes the the U.S.S. Mount Whitney (right) on the Mediterranean Sea in October 2013. (U.S. Navy photo by Mass Communication Specialist 1st Class Collin Turner/Released) The U.S. Navy’s Arleigh Burke-class destroyer typically burns 1,000 gallons of petroleum fuel an hour. Most of the Navy’s fleet shares the same ravenous appetite for fuel, and refueling these massive warships can interrupt missions and present challenges in rough weather. However, researchers at the U.S. Naval Research Laboratory have now proven that it’s possible to power engines instead with a cheap, convenient supply of fuel: seawater. Scientists have spent nearly a decade laboring to turn the ocean into fuel. The breakthrough, demonstrated in a proof-of-concept test, was made possible by a specialized catalytic converter that transforms carbon dioxide and hydrogen from seawater into a liquid hydrocarbon fuel.

The development of a liquid hydrocarbon fuel is being hailed as a game changer. If Navy ships create their own fuel they can remain operational 100 percent of the time, rather than conducting frequent fuel-ups with tankers while at sea, which can be tricky in rough weather. A catalytic converter extracts carbon dioxide and hydrogen from water and converts the gases into liquid hydrocarbons at a 92 percent efficiency rate, and the resulting fuel can be used in ships' existing engines. The feasibility of the approach was demonstrated in the test on April 2, when researchers flew a model airplane using the fuel from seawater. "This is the first time technology of this nature has been demonstrated with the potential for transition, from the laboratory, to full-scale commercial implementation,” said Navy research chemist Heather Willauer in a news release Monday. The next major step is to build the infrastructure to convert seawater into fuel on a massive scale. The Navy would first start mass-producing fuel in land-based operations, which would be the first step toward installing fuel generation systems on ships. The Navy predicts the seawater fuel would cost about $3-6 per gallon, and could be commercially viable within a decade.