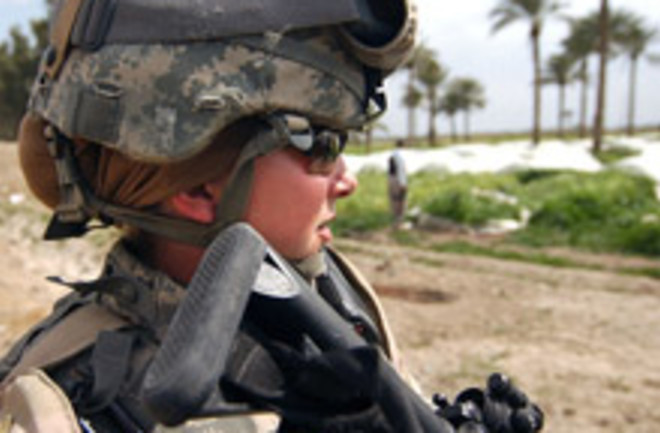 Most garbage-into-energy conversion systems use incineration or gasification, where the waste is heated in the presence of oxygen to create gases that can be used as energy. The problem is that these systems can only take waste from a single source. Now, the U.S. army will use the PyTEC system, made by defense firm Qinetiq, to convert mixed garbage as diverse as glass and tin into energy. Right now, front-line troops in Iraq and Afghanistan don’t have a proper way to dispose of trash on their bases. Now, one of the 55 temporary bases will get a mobile waste system that will produce 400kW of power and squash the waste product down to 5 percent of its original volume. What makes the PyTEC system different from conventional methods is that it doesn’t require oxygen—rather, it uses a process called pyrolysis. Therefore, the waste can be efficiently loaded into a column at a rate of 220 lbs of waste per hour. The BBC reports:

In essence it is the same process that happens above a match; heating of the wood releases gases that burn in the presence of oxygen, producing the visible flame. In pyrolysis, the heating occurs in the absence of oxygen, and the released gases are gathered and stored for later use…. "By providing them with a self-contained waste management capability, we're reducing their logistical footprint, reducing the number of body bags, and reducing their fossil fuel usage," [says Pat McGlead, waste management business development manager for Qinetiq].

This technology isn’t new: Previously a U.K. navy ship was outfitted with a similar system. However, some tweaks have since been made to make it more portable for military use. The device need not be limited to the battlefield—if used in cities, it could reduce the amount of waste by 95 percent. Related Content: 80beats: Could A New Generation of Power Plants Turn Nuclear Waste Into Clean Fuel? Discoblog: Could Poop Fuel Our Future? New Sewage-Powered Buses Hint at Yes