Could a New Generation of Power Plants Turn Nuclear Waste Into Clean Fuel? 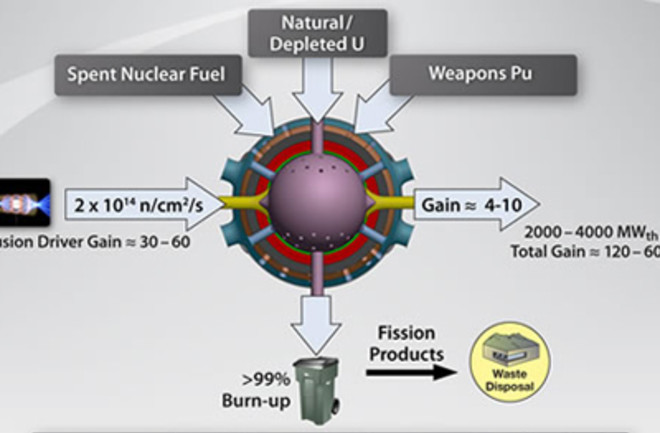 Last week's official dedication of the National Ignition Facility, the massive experiment in nuclear fusion, has set some physicists to plotting ways in which nuclear fusion could be put to work in a new generation of nuclear power plants. Although doubters say that NIF may not even be able to produce a controlled fusion reaction, the same reaction that occurs in the heart of the sun and in thermonuclear weapons, boosters such as U.S. Energy Secretary Steven Chu are already discussing how fusion energy could best be harnessed. Chu notes that the Obama administration's decision to halt construction of the Yucca Mountain repository for nuclear waste has renewed interest in reactors that could actually reduce the nuclear waste produced by traditional nuclear power plants. There are

"a resurgence of hybrid solutions of fusion fission where the fusion would impart not only energy, but again creates high-energy neutrons that can burn down the long-lived actinides" [Technology Review]

, says Chu. Actinides are a group of radioactive chemical elements, including plutonium and uranium, which compose some of the radioactive waste from traditional fission reactors.

Fusion is the process of forcing the nuclei of atoms so close together that they fuse into a nucleus of a new element. (Fission, of course, is the opposite: energy produced by splitting nuclei.) The new, fused nucleus weighs less than the original two. With a bow to Einstein's famous law, the lost mass is transformed into energy, mostly in the form of a torrent of energetic neutrons [Forbes].

In a fusion-fission hybrid reactor proposal suggested by NIF researchers, a

fusion chamber would be surrounded by a blanket of fissionable material, like nuclear waste, that would serve as an additional fuel source.... It would work by using the neutrons from fusion to help turn nuclear waste into nuclear fuel and then burn it until almost none is left [Forbes].

Such a system could overcome the serious drawback of typical fission power plants--their generation of long-lived radioactive waste--as well as the downside of hypothetical fusion plants, which researchers believe would have problems with efficiently producing energy. Back in November, California governor Arnold Schwarzenegger visited NIF and praised their hybrid concept, called the Laser Inertial Fusion Engine, or LIFE.

"If successful, this new endeavor could generate thousands of megawatts of carbon-free nuclear power but without the drawbacks of conventional nuclear plants" [Photons & Fusion]