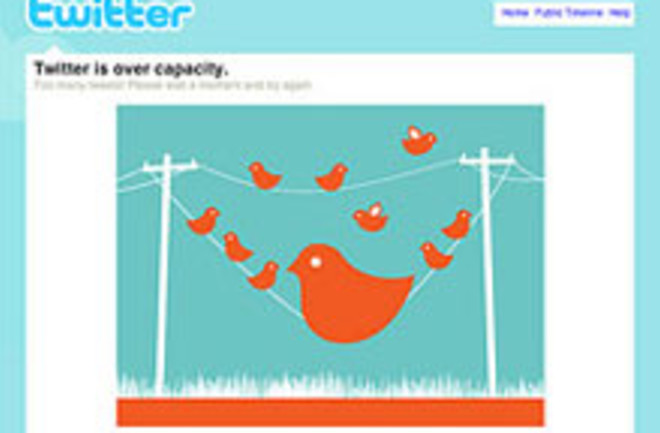 There is no escape. If you thought you spent a lot of time tweeting and reading tweets before, that number could get even higher thanks to "@anywhere," the site's new feature announced at Austin's South by Southwest festival (SXSW) this week. The platform is intended to allow third-party sites to integrate Twitter more deeply and smoothly than they currently can.

. Twitter CEO Evan Williams went fairly light on the specifics of the new system, and gave no release date, during his keynote Q&A at SXSW, but some details have come out.

The way Twitter has described it, @anywhere will allow readers of articles at The New York Times and other sites to click and follow writers directly from their bylines, and—judging by what Evan Williams told Anil Dash on Twitter—will also let them click and see information about popular Twitter users who are mentioned on a participating site [BusinessWeek]

. By expanding the microblogging site's reach, @anywhere appears to be Twitter's answer to Facebook Connect, but

complains that the feature—at least based on what people know about it right now—isn't much to write home about. We love Twitter at DISCOVER (follow us here), but it's easy to see why not everyone would be so excited about allowing the Wild West cavalcade of information that is the Twitterverse to encroach onto their digital turf. According to ComputerWorld, branded Web sites that aren't accustomed to reader feedback probably won't be so keen to allow a sudden burst of it, especially if they'd seen a blast of negative publicity (like, say, Toyota). Lastly, there's was one particular group that wasn't too taken with the Twitter CEO's talk: Twitter users.

Maya Baratz, a product manager at MTV, wrote: “There are hundreds of people in the room. Someone. Anyone. Kanye this keynote and ask Evan a good question.” Another Twitter user posted this report: “The guy behind us is snoring. Literally” [The New York Times]

. Back on his home field, however, Williams tweeted that people could ask him tougher questions there. Related Content: 80beats: Science Via Twitter: Post-Earthquake Tweets Can Provide Seismic Data 80beats: Attack That Took Down Twitter May Have Been Aimed at Just One Blogger 80beats: Twitter Security Breach Reveals Confidential Company Documents 80beats: Researcher Updates His Twitter Feed Using Only Brain Waves Discoblog: My Water Broke! Time to Twitter!Image: Twitter