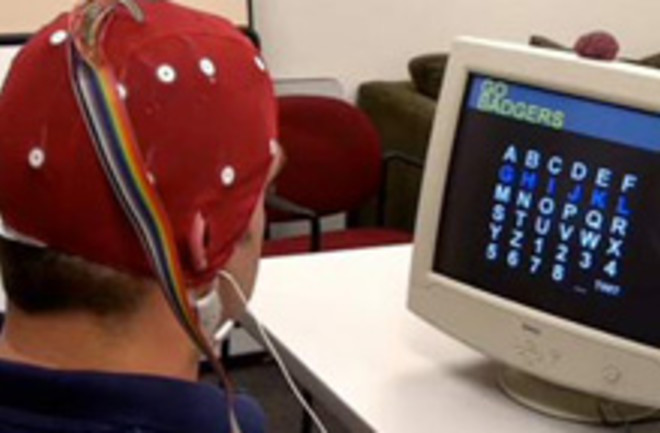 When Adam Wilson wants to update his Twitter feed, he doesn't have to tap out a single keystroke--brainwaves are all he needs. On April 1st, he used a brain-to-Twitter communication system to transmit this message: "USING EEG TO SEND TWEET."

That message may be a modern equivalent of Alexander Graham Bell's "Mr. Watson, come here. I want to see you." Brain-computer interfaces are no longer just a gee-whiz technology, but a platform for researchers interested in immediate real-world applications for people who can think, but can't move [Wired].

"All the letters come up, and each one of them flashes individually.... And what your brain does is, if you're looking at the 'R' on the screen and all the other letters are flashing, nothing happens. But when the 'R' flashes, your brain says, 'Hey, wait a minute. Something's different about what I was just paying attention to.' And you see a momentary change in brain activity" [MSNBC].

After the message has been painstakingly assembled, letter by letter, the user sends it by focusing on the "Twit" box on the screen. When that flashes and the EEG reader picks up the brain signal, the message is sent to Twitter. Twitter, the revolutionary "micro-blogging" service that allows users to broadcast messages under 140 characters in length, might be the best communication technology for people suffering from locked in syndrome, in which the body is almost completely paralyzed but the mind is intact. Williams and Wilson had been experimenting with using their machine-brain interface to allow paralyzed patients to type out and send emails, but they found that process too complicated. Williams says that the patients top request is to

"send simple messages to the people who are thinking of them." The message might be as simple as saying that they're doing OK today, or that they need someone to come by. That makes Twitter "the perfect application" for the system, Williams said. Patients can send a simple message to everyone who wants to know how they're doing [MSNBC].

Ten patients will soon test out the technology in their own homes.

That system is not yet commercially available, but that day could come soon. "It's at the point where it's beyond proof of concept," Wilson said. "We know it works. The next question is how to integrate it into people's homes, so that a caretaker could set it up without need for outside help" [Wired].