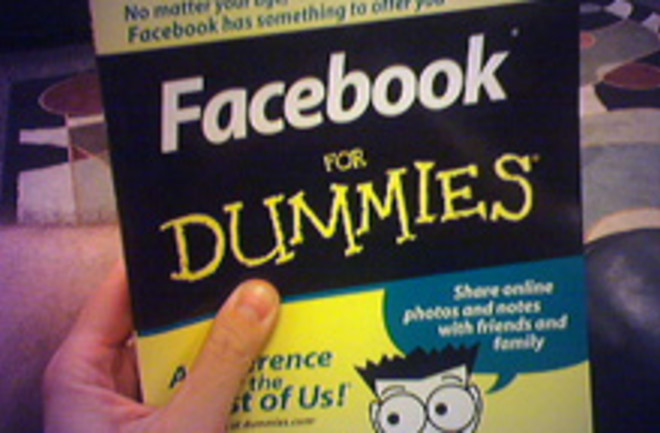 Love 'em or hate 'em, social networking tools are growing faster than anyone can keep track of, and are being used plenty of unexpected ways. Some developments are questionably beneficial, like new education standards in England that may require students to learn to use online tools like Twitter and Wikipedia, while scrapping history. Who needs a textbook to teach the Second World War when you can learn about it from a user-generated encyclopedia? Other ideas have ambition, like Nokia's investment in a California startup that will allow cell phones to act, essentially, like credit cards. Now, the developed world may not need additional forms of credit, but in countries where people often lack bank accounts, the ability to use prepaid phone credit as cash—or to transfer funds for a loan to a friend, for example—will facilitate transactions and a lot of everyday life. For people new to networking sites like Facebook, the hilarious Facebook survival guide helps adults acclimate to their new social environment. It offers advice like: "If you don't care about the jerky details of Jerkwad's summer 'vacay,' don't make Jerkwad a friend." It also recommends using judgment in what news you decide to announce online: "Your sainted Grandma never threw wide the shutters and bellowed, 'What up haters? I'm pregnant!' to the assembled townfolk, now did she?" In the real world, then, it would probably be frowned upon for prison officers and inmates to be Facebook "friends." But that's just the reason 27-year-old Nathan Singh was dismissed from his position at a British prison. Another Facebook no-no? Announcing your divorce via your status update—though that didn’t stop England’s Neil Brady, whose wife Emma learned he wanted a divorce when a friend called her after reading the following on Neil's profile page: "Neil Brady has ended his marriage to Emma Brady." Granted, Emma is now free to post ample pictures of her hot twenty-something boyfriends. Related Content: Cosmic Variance: Karl Rove is Following Me on Twitter Reality Base: Charged With a Crime? Better Check Your Facebook Pictures Reality Base: Insert “Superpoke” Pun Here: Facebook Used to Serve Court Documents

More From Discover
The Sciences
Scientists Reconstruct Songs From A 150-Year-Old Bug
The Sciences
Scientist You Should Know: Monika Schleier-Smith and the Quantum Universe
Technology
Some Researchers Debate if we are Living in a Computer Simulation
Technology
How Does 3D Printing Actually Work and What Can You Make?
Technology
Worried About Your Privacy? A New Tech Could Reduce Eavesdropping on Devices
Health
Time vs. Money: Understanding and Alleviating Time Poverty
Recommendations From Our Store
My Science ShopDiscover STEM Kits
My Science ShopDiscover 2022 Calendar
My Science ShopStrange Science
My Science ShopElements Flashcards
Shop Now
Stay Curious
Join
Our List