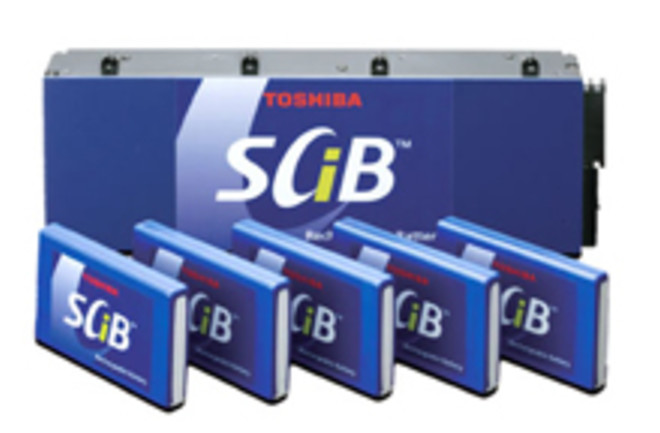 Is this battery the one? Toshiba's Super-Charge Ion Batteries, which reportedly lose hardly any capacity after thousands of charges, could be coming to cars next year. As Slashdot noted today, this battery technology has been a long time coming. In 2007 Toshiba announced the creation of the SCiB, and unveiled the prototype the next year. It lasts 5,000 to 6,000 cycles as opposed to the 500 for standard lithium-ion batteries, and charges to 90 percent of capacity within five minutes. Earlier this month, the company announced it has been working with car maker Mitsubishi on electric vehicle batteries, and could be making SCiBs for cars staring next year.

For EV applications Toshiba has developed a new anode material and a new electrolyte to improve safety and rapid recharging. According to Toshiba, the long life will promote reduction in the waste that results from battery replacement, reducing the impact on the environment [Gizmag].

The potential for Toshiba's long-lasting battery has electric car enthusiasts excited as the tech moves to vehicles, where current batteries

' limitations have held back electric car development. But the company is far from the only one working up new ideas for Japan's car makers—battery makers want contracts for their company's design, and car makers want to sign up multiple designs in case some don't pan out.

Presuming Toshiba succeeds in scaling up the SCiB, the company wants to use the idea not only in cars, but also in smaller vehicles like electric motorcycles and in large projects like storage on the power grid, another place where the lack of a worthy battery system has held back the development of renewable energy sources and safety backups

for the power supply. Related Content: DISCOVER: 8 Big Ideas That Could Pave the Road to Clean Energy

80beats: How To Make a Battery Out of Office Paper & Nanotubes

80beats: Will the Pentagon Build the Jetsons' Flying Car?