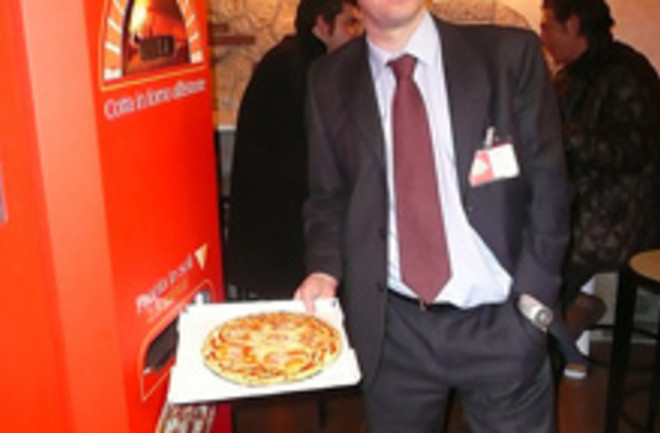 It’s an ironic invention in a country that takes its pizza seriously, even pushing for pizza-policing legislation. But this culinary "cultural commodity" for Italy can now be made—fresh!—by a vending machine. "Let's Pizza" is a bright red machine that, using technology developed at the University of Bologna, kneads flour and water into dough, forms it into the classic round shape, spreads the sauce and adds the toppings of a customer's choosing—either cheese and tomato, ham, bacon, or fresh vegetables. The pizza then bakes in an "oven" that uses infrared rays, and when finished, slides right out into the hungry customer's hands. The whole thing takes less than three minutes, and the machine has windows so people can watch the yummy concoction being made. It's like culinary entertainment! The machine's creator, Claudio Torghele, says it is more than a vending machine—"it's a mini-pizzeria." And in this economy, at half the price of eating in an average Italian pizzeria, who can argue with that?