This Is What Every Element Is Used For 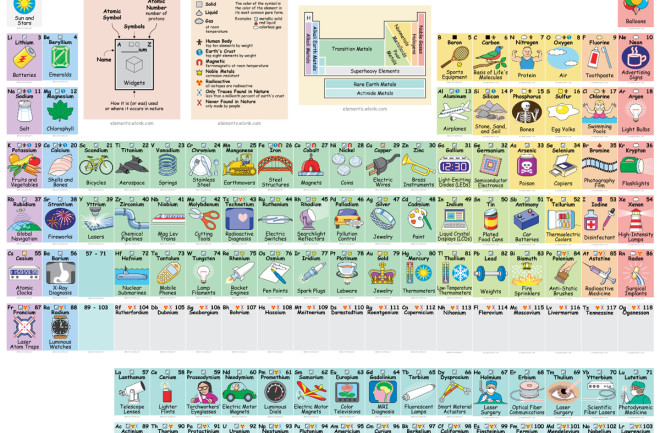 When it comes to the elements, humans are pretty good at ensuring that nothing goes to waste. We’ve put nearly every element on the periodic table to work, whether it’s fueling chemical reactions within our bodies or propelling payloads to orbit.

We all know what some of the 118 elements are used for — we breathe oxygen, pour chlorine in our swimming pools and wrap gold around our fingers — but what about some of the more underrated members of the periodic table? Take, for example,  yttrium, hafnium and samarium — did you even know they existed?

This interactive periodic table from Seattle-based designer Keith Enevoldsen puts the elements in the context of their uses, making for a far more relevant way to study chemistry. Along with the name and atomic number of each element, Enevoldsen added helpful graphics and a short explanation of how each element is put to use. Some of those more obscure elements play fundamental roles in shaping modern-day society: lighter flints use cerium, smoke detectors have americium inside, and color televisions need Europium to function.

A few elements have no current uses, such as protactinium and berkelium. The short-lived, man-made elements starting with einsteinium have no uses at the moment either, as they don’t stick around long enough for scientists to experiment on them. As the search for new elements continues, however, we may yet find something useful, especially if researchers ever happen upon the “island of stability” a point where large elements become stable enough to stick around again.