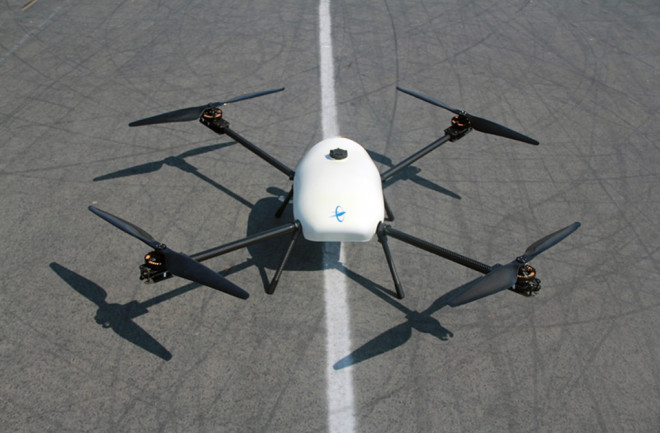 The Skyfront Tailwind is a hybrid powered drone that can be powered by both gasoline and electricity. And it just broke a record ― well, sort of ― for the longest drone flight. (Credit: Skyfront) What story would you believe: A story about a drone that can fly for 4 hours or 4 minutes? Probably the latter, but this is a story about a hybrid powered drone that can fly for hours. Whether it's a researcher using drones to drop bugs onto crops or a hobbyist trying to capture epic aerial photos, drone pilots are often plagued by low flight time. But that's not a problem with Skyfront’s Tailwind drone, which the company says flew for 4 hours and 34 minutes. That’s right. This drone was in the air for more than four hours. It flew in winds that were between 8 and 10 mph, with gusts up to 15 mph. But how can a typical drone battery last that long? It can’t. The Tailwind is a hybrid gasoline-electric multirotor drone that doesn't rely solely on lithium polymer batteries that power most civilian drones, which typically endure under 30 minutes. For reference, the DJI Mavic Pro drone has a flight time of about 25 minutes and the DJI Phantom 4 lasts about 30 minutes.

And That’s Another Drone Record … Sort Of

With a flight time of more than four hours, the drone must have broken some kind of record right? While this isn’t an official record for the longest drone flight, the Tailwind UAV did break the unofficial 2015 record set by EnergyOr Technologies when its hydrogen fuel cell multirotor drone flew for 3 hours and 43 minutes. For those who are skeptical, here’s proof of the Tailwind's flight where you’ll see the drone continuously bob up and down. Thankfully, the video is sped up so we don’t have to sit through more than four hours of a drone just hovering. https://www.youtube.com/watch?v=OYJuV92yjv0&feature=youtu.be But the Skyfront team, which is comprised of physicists, engineers, entrepreneurs, aviation fanatics and roboticists, wants to push the drone further. “Within a couple of weeks, we expect our UAV to fly for a full 5 hours, and further out we expect it to travel for over 100 miles,” Skyfront CEO Troy Mestler said in a press release. The Tailwind drone is supposed to be available in 2018, and is geared toward commercial drone operations in the agriculture and energy and utility industries. Skyfront isn’t releasing its cost at this time.