This Glass Lets You Enjoy Whiskey in Zero Gravity 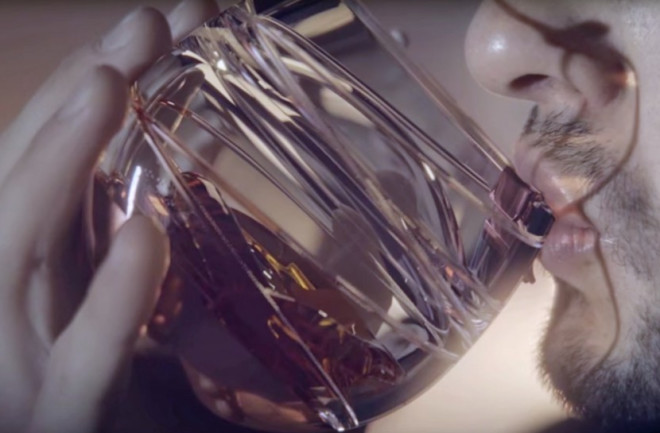 (Credit: Screengrab from YouTube/Ballantines) When space tourism eventually takes off, you can guarantee the first travelers to shell out the money to get there will also want to partake in the finer things in life – like a good whiskey — while enjoying their place on top of the world. But pouring a nicely aged whiskey is basically impossible without gravity there to lend a hand. Fortunately Ballantine’s, a maker of blended Scotch whiskey, has a solution: On Friday the company unveiled its Space Glass, which is the first vessel engineered specifically to deliver a distilled beverage to your lips while enjoying the weightlessness of space.

The Space Glass, designed by space enthusiasts at the Open Space Agency, works by exploiting an age-old principle called capillary action, which was first discovered by Leonardo DaVinci. Capillary action is the ability of a liquid to defy gravity by clinging to the walls of narrow vessels. It’s the same process that allows water to travel from a plant’s roots to its flowers. To fill Ballantine’s Space Glass, whiskey is injected through a valve at the bottom of the cup, which is made from 3-D-printed plastic, and into a reservoir. The whiskey then travels through a narrow channel that spirals up to a mouthpiece situated on the brim.All you need to do is then suck the beverage in and enjoy. By all appearances, it looks like a sleek sip cup for adults.

(Credit: Open Space Agency) The design team took their cup to a zero gravity testing laboratory in Bremen, Germany, called a drop tower. Here, objects are placed in a vacuum-sealed shaft and dropped from a height of 360 feet. As the capsule falls down the shaft, it creates zero-gravity conditions for a few seconds, allowing scientists to observe how objects behave in a weightless environment. In the tower, Ballantine’s cup behaved according to plan; the whiskey moved up the channel and into the mouthpiece.

To accent the Space Glass, Ballantine’s also created a special whiskey blend to satisfy the dulled palates of space travelers. To live in a weightless environment is to also live every day with cold symptoms. Water in the body flows into space travelers’ upper extremities in a weightless environment, resulting in constant cold-like congestion. As you know, this dulls your sense of taste, so Ballantine’s space whiskey has a little more zing than its terrestrial blend. There are several startups vying to become the pioneer in space tourism, like Sir Richard Branson’s Virgin Group. There’s no telling when the first tourists will set a course for the stars, but when they do, they’ll have a few creature comforts to enjoy the journey that much more.