"The Shallows" Rehashes the Weak Argument That Google Makes You Stupid 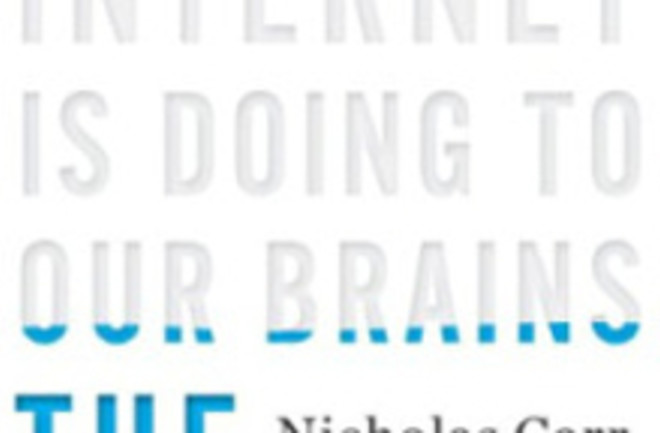 Remember the kerfuffle over "Is Google Making Us Stupid?" The 2008 cover story in The Atlantic by Nicholas Carr contended that the barrage of information available on the Web is changing our brains, making us all shallow and deficient in our attention span. It also raised a ruckus across the blogosphere with Web users who didn't like to be called "stupid." Now, as if to challenge our cultural ADD, Carr has expanded that article into a book: The Shallows: What the Internet Is Doing to Our Brains. In book reviewers, Carr finds a friendlier audience to his "more books and less Internet" thesis. The Boston Globe is impressed with the argument, if unimpressed with drawing out the argument to such a great length:

Carr’s argument rests on just three chapters (out of ten). He lays out, first, what we now know about the adult brain’s malleability, or “plasticity,’’ and then draws on a slew of recent studies to make the startling case that our increasingly heavy use of digital media is actually changing us physiologically — rewiring our neural pathways. And not necessarily for the better. “The possibility of intellectual decay,’’ Carr notes, “is inherent in the malleability of our brains.’’

Carr, promoting his book with a CNN essay

, grabs neuroscience studies to bolster several claims: That people who multitask while online struggle to concentrate when they're offline, that spending a lot of time on electronic devices hinders creative and critical thinking, and that students who surfed the Web during a lecture retained less information than those who listened with laptops closed. (That last one is kind of a "duh"—people who fill out Sudokus or read "Twilight" books during class probably don't retain much, either.) But neuroscience author and blogger Jonah Lehrer is unimpressed with Carr's scientific rigor, and with his respect for the brain. Sure, Lehrer says in his New York Times review

of the book, we bounce around the Internet, distracted at every turn:

But this isn’t really the fault of the Internet. The online world has merely exposed the feebleness of human attention, which is so weak that even the most minor temptations are all but impossible to resist. Carr extends these anecdotal observations by linking them to the plasticity of the brain, which is constantly being shaped by experience. While plasticity is generally seen as a positive feature — it keeps the cortex supple — Carr is interested in its dark side.

In addition, Lehrer says, Carr may have cherry-picked studies to support his argument, but the science is not nearly so one-sided:

What Carr neglects to mention, however, is that the preponderance of scientific evidence suggests that the Internet and related technologies are actually good for the mind. For instance, a comprehensive 2009 review of studies published on the cognitive effects of video games found that gaming led to significant improvements in performance on various cognitive tasks, from visual perception to sustained attention. This surprising result led the scientists to propose that even simple computer games like Tetris can lead to “marked increases in the speed of information processing.”

The key to the Carr argument, then, is not so much scientific rigor as it is an appeal to an extremely enticing romantic appeal. Even among the many Web-savvy people who responded with derision toward what feels like a reactionary attack on the modern way of life, there is the basic longing to disconnect now and then. The Wall Street Journal's John Horgan

says even those who grew up never knowing the absence of the Internet, like his teenage kids, feel it:

Like most American kids, they commune with friends via text messages and Facebook updates (email is so passé), and they spend endless hours trolling the Web for odd videos and cool music. But rather than dismissing Mr. Carr's thesis as old-fogeyish, as I expected, they confessed that their dependence on the Internet sometimes worries them. My son would like to cut back on his online time, but he fears isolation from his friends.

But the fact that we know too much Web time could have negative side effects, and that we have doubts about the thing that made our lives so much more connected, doesn't mean it's making us stupid. As many reviews have noted, it's hard not to see The Shallows as little more than the latest in a millennia-long line of nostalgia-driven scares brought on by technological revolutions, especially ones in information and media. For more on this, check out DISCOVER blogger Carl Zimmer's rebuttal to the initial Carr article, "How Google Is Making Us Smarter

on the history of technology scares. And remember, the power of the Internet allows you to use your brain how you wish. As the San Francisco Chronicle concludes

Perhaps, way down deep we are becoming superficial. Yet at least this information will be available to everyone, and even with the shallowest of readings, exposure to new information will create its own new and illuminating associations. Internet access is like having the keys to the world's greatest library. Provided that we do not become slaves to this technology, how we use this library remains our choice.

Hey, look at you, Internet user—you made it all the way to the end. Related Content: DISCOVER: How Google Is Making Us Smarter

DISCOVER: You Know Too Much

DISCOVER: Which Brain Games Will Help Your Brain the Most?

Discoblog: And the Survey Says: Google Is Not Making You Stupid