The Science of Sous Vide

“Sous vide,” or “under vacuum,” refers to a style of cooking in which food is sealed in a plastic bag and submerged in a water bath that is held at a controlled temperature [1]. This technique originated in ancient times when humans wrapped their food in salt, fat, animal leaves, and animal bladders before cooking [2]. Sous vide in its fully realized form began in the 1960s as NASA scientists began to incorporate this concept into creating astronauts’ sealed-bag meals [2]. In the 1970s, French chefs (who had already popularized cooking en papillote or in paper), adopted the sous vide technique of cooking in plastic [3]. From here, sous vide spread to professional kitchens across the world, but it was not until the 1990s that food scientists began to study the deeper science behind sous vide processing. By the mid-2000s, sous vide became widely known and the past decade has seen a massive increase in its popularity [1] where it is heralded as “the most important technological advance in the kitchen since the microwave.” [3] Before sous vide machines were accessible to the home chef, a common method was using an ice chest, which keeps water hot long enough to effectively sous vide food [4]. Although this is still a popular and inexpensive technique, sous vide machines are now available from many brands for under $200.

Traditionally cooked steak (left) vs. sous vide steak (right). The gradation isvery visible in the traditionally cooked steak. [Photo credit: Modernist Cuisine]The appeal of sous vide comes with its ease and ability to precisely control the temperature at which the food is cooked. By targeting a specific minimum temperature at which proteins denature, it is virtually impossible to overcook your food. When food is cooked by traditional methods such as on the stovetop or in the oven, the outside of the food rises to temperatures that are much higher than the final desired temperature of the food. This increases the risk of overcooking the outside (and inside) of the food in an attempt to reach the correct internal temperature. By using sous vide, food is cooked for a longer period of time and at a lower temperature than usual and is raised uniformly to the same temperature [5]. This prevents evaporative loss of moisture (Fig. 1) and enables tough cuts of meat to be made tender while still cooking them medium/medium-rare [1]. 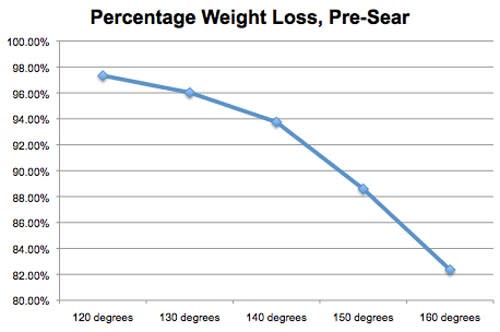 Figure 1: The weight loss (moisture loss) from New York strip steak at varying temperatures ranging from 120-160°F [6].Another advantage to sous vide is from a nutritional standpoint. Sous-vided vegetables retain their vitamins and trace elements; by contrast, boiling removes 60% or more of these nutrients [3]. Sous vide also requires little added fat (oils, butter, etc. are usually added solely for flavor). Additionally, because the food is sealed in a plastic pouch, this largely reduces oxidation and therefore preserves the nutritional qualities of polyunsaturated fatty acids [7]. Lastly, because food can be cooked at lower temperatures, the vitamins that are normally destabilized at the high temperatures of traditional cooking methods are preserved [8]. While this effective technique was formerly limited to professional kitchens, it is now accessible for the home cook! Companies such as Anova, Nomiku, and Sansaire have recently developed sous vide machines at an attractive price point. Fascinated by the attention around this rapidly popularized method, I purchased my own Anova and set out to test to see if these sous vide machines lived up to the stories.

At-home immersion circulators from different popular brands. [Photo credit: Modernist Cooking Made Easy]The first beast I tackled was the one I have always had a penchant for overcooking – the New York Steak. No matter what technique I tried to use, I always end up oversearing and getting a ring of medium-well steak around my perfectly medium-rare center. Using one of my favorite sites for recipes, Chef Steps, I attempted their Simple Sous Vide Steak with Red Wine Sauce. I pre-seared my steaks (this gives you a better crust at the end of the cooking process), placed them in a Ziploc bag with some butter, and popped them into my preheated 135°F water bath. After an hour I removed the steaks and quickly seared them again to get a delicious golden brown crust. Result? Mouthwatering, juicy, tender steak with unbelievable flavor and a beautiful medium-rare interior that extended from edge to edge. Absolute gastronomic perfection.

Results from my sous-vided New York steak. [Photo credit: Ashton Yoon]Thrilled with the results of my first experiment, I tackled a variety of other proteins and the results of these attempts are shown below. Salmon was so simple: a quick 20 minutes at 126°F yielded the most buttery salmon I had ever tasted, with a compelling sashimi-like texture.

Eggs during the sous vide process, no plastic sealing needed (left). Egg cooked at 155°F, recipe from Serious Eats (right). [Photo credit: Ashton Yoon.]My impression of at-home sous vide? Stellar. Not only was the entire cooking process easy, but I was guaranteed to get perfect results every time. The flavors and moisture retention were incredible. And the added nutritional value is just the cherry on top of the already sweet, sweet cake. References cited