The Future of Billboards: Bendy and See-Through? 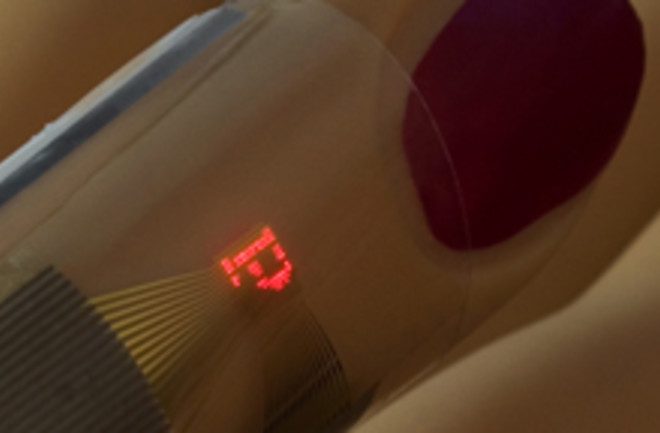 What if you could take a video billboard like those that light up Times Square and wrap it around a bus--without impeding the passengers' view through the windows? While some folks who worry about ads saturating our environment would probably be horrified, others might admit that it would be a pretty neat technological trick. Now, a new method of producing the inorganic light emitting diodes (ILEDs) that light up billboards offers a possible way to bring that trick about. The findings, published in Science, come as something of a surprise. It's been organic light emitting diodes (OLEDs) that have been a hot field of research lately, as scientists experimented with ways to spread films of organic compounds--which emit light when an electric current passes through them--over thin, flexible surfaces. But OLEDs aren't very powerful, which caused lead researcher John Rogers to look for new ways to make inorganic diodes. Says Rogers:

"If you look at the billboard displays that exist already, they're inorganic LED based.... You can see them on a bright sunny day; it would be impossible to generate that kind of brightness out of an organic LED" [BBC News].

Typically, ILEDs are expensive and difficult to make.

The manufacturing process involves sawing wafers of semiconducting materials such as gallium arsenide, picking and placing each piece individually using robotics, and adding electrical connections one at a time [Technology Review].

In the new process, the researchers first grew the inorganic diodes on a "sacrificial" layer, then used a chemical bath to etch out the diodes. Next, a stamp picked up the diodes as if they were ink from an ink pad and printed them on a variety of materials, including glass, plastic, and rubber. Because each diode emits a good bit of light, they can be placed relatively far apart on a transparent surface, which should allow for see-through displays. The project

was initially funded in part by Ford Motor Co, which was looking for a way to make brake lights that can follow the contour of a car [Reuters].

will be in general lighting or in the illumination of instrument panels, but the group is working toward perfecting the application. "Displays remain the ultimate goal - we don't need a new law of physics to enable it, it's just more of an engineering question" [BBC News]

. Related Content: 80beats: Big Advance in OLED Lighting Might Signal Beginning of the End for the Bulbs 80beats: Rubbery Computer Screens Can Be Bent, Folded, and Even CrumpledImage: D. Stevenson and C. Conway, Beckman Institute, University of Illinois