The "Father of the Internet" Would Rather You Call Him "Vint"

Vinton Cerf played an instrumental role in creating the digital age—though he insists he wasn't alone. 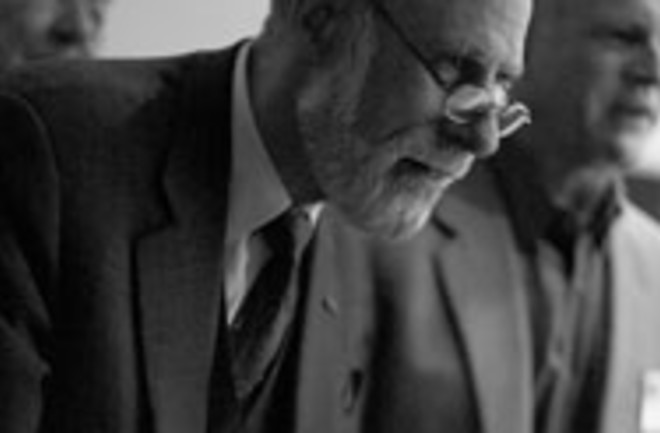 Vinton G. “Vint” Cerf isn’t crazy about being called “the father of the Internet”—he insists that many people were involved in its invention. But he is the man who did the most to make it happen, writing the communication protocol for Arpanet (the “original” Internet developed by the Defense Department in the late 1960s) and codesigning the protocols (known as TCP/IP—Transmission Control Protocol/Internet Protocol) that allow computers everywhere to communicate with each other, giving us access to whole worlds of information. In 2005 Cerf (and longtime collaborator Robert Kahn) received the Presidential Medal of Freedom, the highest civilian honor given in the United States, in recognition of work that had placed them “at the forefront of a digital revolution that has transformed global commerce, communication, and entertainment.”

Cerf has attributed his interest in the Internet in part to having lost much of his hearing when he was a child. Internet communication technologies, he points out, provide “a level playing field” for deaf people.

Most recently Cerf has been involved with NASA’s Jet Propulsion Laboratory in helping move the Internet to other parts of the universe. The “Interplanetary Internet” will create new means of communication from planet to planet with the use of radio/laser technologies.

An appreciation by Tim Berners-Lee, inventor of the World Wide Web and holder of the 3Com Founders Chair at the MIT Lab for Computer Science.

Vint’s great success was to make the Internet a platform that is usable for all kinds of future technologies, without trying to second-guess what they might be. Thanks to this approach, I was able to design the Web on top of the Internet because it was a strong but plain foundation for things to come. In designing Web technology, we try to take the same approach.

As a person, Vint has been not only an engineer but a leader. He has tried to ensure that both the Net and the community of developers evolve in a healthy way. This means both sound engineering and a positive impact on society.