Why China has as many IP addresses as an American university, which ISP should be called "Spamalot," and more. 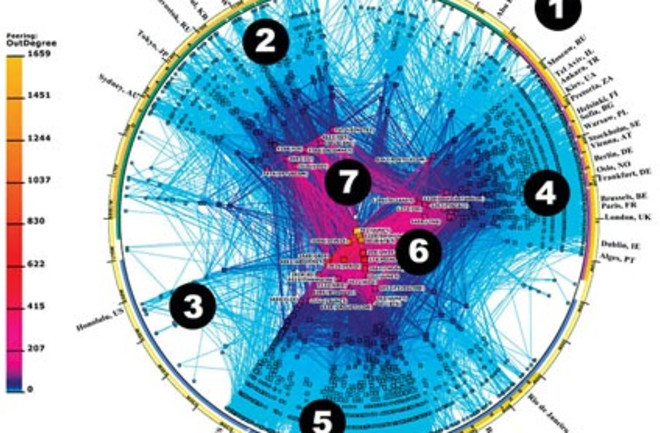 Information moving through cyberspace travels in tiny packets that hopscotch around the world. Using data from a two-week stretch in April 2005, the Cooperative Association for Internet Data Analysis (CAIDA) traced these packets' paths from hub to hub and country to country to capture a snapshot of the worldwide network topology.

CAIDA's map represents a flattened Earth, with cities positioned around the circle. Tracing the circumference clockwise corresponds to moving from east to west. Each square represents a data hub, which lines up on a spoke with the city in which it is registered. The closer to the center it lies, the more data it traffics.

The United States owns 74 percent of the 4 billion available Internet protocol (IP) addresses. China's stake amounts to little more than that of an American university. Not surprisingly, China is championing the next wave of the Internet, which would accommodate 340 trillion trillion trillion IP addresses.

3 YOU STILL WON'T GET TO HAWAII

Hubs in Honolulu—and all over the Pacific—connect to only a few other hubs, which means your data are highly unlikely to pass through the Aloha State.

4 RING AROUND THE NET

The concentric rings of squares near the perimeter result from CAIDA's mapping mechanism, which plots a hub's distance from the center according to how many connections it has.

5 BRING IT ON HOME

The farther from the center, the lonelier the hub. The squares closest to the circumference of the circle represent the Internet service providers, or ISPs, that connect home PCs to the Internet. When one of these goes down, customers have no other way to get online.

UUNet is one of the oldest and largest ISPs; it connects to more than 2,000 other hubs. It is also the most vulnerable to junk mail and hosts more spam-generating gangs than any other ISP.

7 CAN THE CENTER HOLD?

If a high-traffic hub goes down, the data will usually find another path. "There are shortcuts everywhere," says CAIDA's Brad Heffaker. If a packet can't find its way, it returns a discouraging message to the sender.