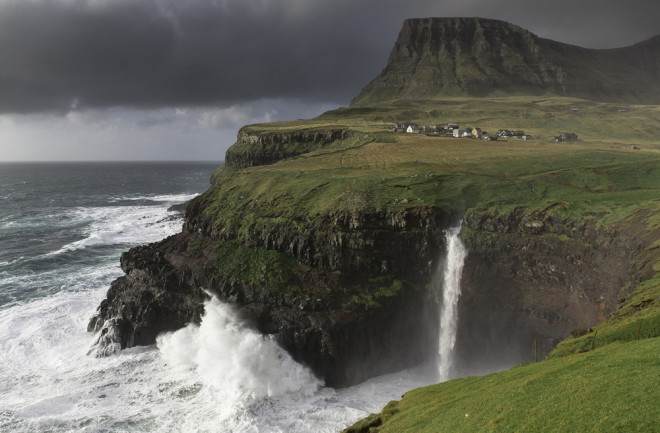 Strong winds blowing in from the ocean make the Faroe Islands an ideal spot for wind power. | Sam Edmonds/Corbis

On the edge of a hill sprinkled with sheep, above a quiet two-lane highway, sits the smolt site for HiddenFjord fish farm. The group of small warehouses overlooks a picturesque inlet, bordered by hills, waterfalls and rolling clouds. A nice view, but nothing unusual for the Faroe Islands.

Inside one warehouse are three water-filled concrete tanks, each about 15 feet in diameter. It’s quiet, save for the muffled hum of engines pumping oxygen into the water. The millions of salmon that pass through these tanks each year, swimming and eating at all hours, leave the air with a distinctly earthy smell.

Fish-farming companies such as HiddenFjord, in the town of Sørvágur, are the lifeblood of the Faroe Islands, a small nation in the North Atlantic Ocean halfway between Iceland and Norway. In a given year, fish may make up to 96 percent of the country’s exports. Many Faroese salmon are destined for fine restaurants in the United States, the United Kingdom, Germany and Russia.

But the fishing industry in the Faroe Islands faces a serious threat — one that, in just 30 minutes, could cost a fish-farming business about $3 million and years of production: power blackouts.

“If the main [electricity] net is down and the generator system is not working, we are in big trouble,” says Roi Joensen, a technical manager at HiddenFjord. Without electricity to power the pumps that feed oxygen into the salmon tanks, the fish start to die off. The longer the power is out, the more fish die.

In a country where brutal winds can blow streams up cliffs and topple wind turbines, creating a stable, independent power system has proven challenging and expensive. Because of the Faroe Islands’ small size, when volatile weather knocks out power in one spot, it often affects the power supply elsewhere as well. And since it is isolated from mainland Europe’s energy sources, the Faroe Islands historically has relied on imported oil to generate electricity and keep the lights on. In 2011, about 60 percent of the region’s power came from imported oil — a practice that will only become more costly if oil prices rise.

To circumvent the volatility of the oil market and preserve their slice of Eden, Faroe Islands residents are developing a power system based on renewable energy. At the heart of their plan is an unusually ambitious goal: to produce 75 percent of the nation’s electricity from renewable resources by 2020. By comparison, the European Union’s 2020 target is 20 percent.

So how does this little-known fishing nation, with a population of just 49,000, plan to achieve this? By marketing itself as the perfect playground for experimental green energy technology.

If the Faroe Islands succeeds in developing a stable energy system that integrates large amounts of renewable energy, not only will the country secure its own economy, it also could light the way toward low-carbon energy solutions around the world.

The islands are ripe with fuel for wind, hydro and tidal power. (Although they’ve dabbled in solar, the region’s few winter daylight hours make it less viable.) In this remote archipelago, harnessing the elements to supply its power makes perfect sense.

“We are living from what you get from the sea and from the land,” says Svend Aage Ellfsen, a local hotel owner who served as the islands’ minister of energy in the 1990s. “I think every man and woman on the Faroe Islands is extremely aware that we have to take care of nature. So renewable energy has a first priority.”

And the Faroe Islands’ size makes it ideal for testing new technologies because their effects on the country’s tiny grid are easier to measure, says Terji Nielsen, a project manager at SEV, the main utility company.

At the site of SEV’s first major foray into wind power — a blustery spot overlooking the sea near the little town of Toftir — traditional wind turbines have been replaced with newer models more suitable for the islands’ small grid. Now, looking to capitalize further on the islands’ high winds — which can reach more than 100 mph during storms — SEV has established a new wind park named Húsahagi, right outside the capital of Tórshavn. Completion of the project last December expanded SEV’s fleet of turbines from five to 18; about 23 percent of the country’s energy production now comes from wind.

Private energy company RØKT — SEV’s sole competitor in the Faroese market — is exploring ways to take advantage not just of the island’s strong winds, but also its lakes and mountainous terrain.

RØKT founder Jóhan í Niðristovu is testing a hybrid wind and hydroelectric pump system that will use RØKT’s three wind turbines and two nearby reservoirs in the town of Vestmanna. One reservoir sits next to the turbines, at the top of a hill. The other reservoir lies partway down the hill. Niðristovu’s plan is to connect the two by expanding an existing tunnel between them. During the day, when demand for electricity is higher, power will be generated by both the wind turbines and water flowing from the upper reservoir to the lower. When demand for electricity dies down at night, power generated by the wind turbines will be used to pump water from the lower reservoir back to the upper reservoir, replenishing it.

The idea, says Niðristovu, is to combine wind and hydropower into a single system. “We are only looking at where you can use known technologies, but in a different way,” he says.

Most foreign energy investment in the islands is in cutting-edge new technology, rather than traditional wind and solar. For example, SEV is seeking corporate partners for a new tidal power project.

Similar to larger countries attempting to expand renewables, the Faroe Islands’ biggest problem lies in storage and integration into the grid. One downside of wind power is that it’s often windier at night, but electricity demand is highest during the day. That variability raises a question scientists around the world have grappled with for years: What is the most efficient way to ensure renewable energy is available when demand is greatest?

Strong winds blowing in from the ocean make the Faroe Islands an ideal spot for wind power. | Sam Edmonds/Corbis

SEV plans to install a new battery system at its Húsahagi wind farm in October that will store energy to make up for the turbines’ unpredictable output. And through a bundle of projects with DONG Energy, Denmark’s largest power company, SEV is testing new grid technologies designed to deliver renewable power where it’s needed, when it’s needed.

In 2012, the utility installed a type of “smart grid” technology called Power Hub, a digitized system that can automatically determine how to allocate resources and power throughout a large system composed of microgrids — town or neighborhood-size operations that connect to a larger grid. At its headquarters in Copenhagen, Denmark, Power Hub monitors the ebb and flow of electricity around the Faroe Islands.

If there’s a change in electricity production or a drop in power, Power Hub will reroute electricity throughout the system to keep it stable. The idea is that a large, interconnected system composed of smart microgrids will be more resilient, helping to eventually eradicate — or at least greatly minimize — blackouts.

To put Power Hub to the test, SEV and DONG Energy identified three industrial sites on the Faroe Islands that are major power consumers: HiddenFjord fish farm; a cold storage site called Bergfrost; and Kollafjord Pelagic, a fish processing facility. Anders Birke, the lead IT architect at DONG Energy, says the peak consumption of these three sites totals up to 10 percent of the peak energy consumption on the islands.

The test showed that the facilities especially benefited from a Power Hub feature called virtual inertia, which allows part of each factory to be shut off for a short amount of time without any adverse effects. By switching off power at the industrial facilities, Power Hub creates enough time to address whatever problem caused a drop in power elsewhere on the grid. (Each facility reserves the right to turn off Power Hub if it looks like the power dip will take too long to fix and affect operations.)

“It’s the combination of all the different capabilities that Power Hub has that makes it one of the world’s most advanced systems,” Birke says.

So far, the smart microgrid technology has performed well. Although Power Hub has not completely eliminated blackouts on the Faroe Islands, the lights go out less often now. SEV’s Nielsen estimates that Power Hub has prevented three full blackouts on the islands so far and has reacted to about 50 minor power fluxes. HiddenFjord is now incorporating Power Hub into a new warehouse at its smolt site.

For a long time, the Faroe Islands has languished in quiet obscurity. But perhaps the tides are about to turn. Successful projects on the Faroe Islands can inform how other small island nations, and even mainland countries, approach reliable, renewable energy. Recently DONG partnered with Schneider Electric, a French energy management company, to build on Power Hub’s success in the Faroe Islands and bring it to other remote islands around the world.

The Faroese hope this is just the beginning: They invite foreign innovation with open arms. “We are moving quite fast in the right way,” Niðristovu says. “We have the area, so just come.”

[This article originally appeared in print as "Power Island."]