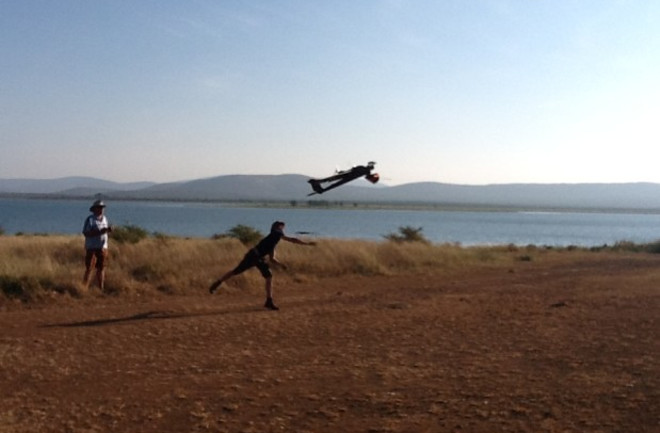 Air Shepherd pilots launch a drone to hunt down poachers. (Credit: UAV and Drone Solutions) Every year, poaching claims the lives of roughly 40,000 elephants and 1,200 rhinos, and that number is expected to increase as demand for ivory continues to grow. But in places where drones and humans work in unison, the death toll is drastically reduced. That's the thinking behind Air Shepherd, an initiative backed by the environmental nonprofit Lindbergh Foundation: combining drones, algorithms and human muscle to bring the number of poaching deaths to zero. Zilch. Nada. They’ve already proven it’s possible.

Help From the Skies

Drones have been used to patrol African wildlife refuges for some time, and with good success. Drones, for example, helped conservationists reduce the number of rhino poaching deaths by 65 percent during the course of a two-year program in Hluhluwe-Imfolozi Park in South Africa. But the Air Shepherd team believes it can do better with its multifaceted approach. Powerful predictive software developed by University of Maryland mathematicians provides their foundation. The software analyzes historical data about a particular area such as poaching location, times, weather specifics, environmental conditions, ranger availability and more. Using this information, the software predicts where poachers are likely to strike next. The same software has been used to predict the location of roadside bombs in Afghanistan and Iraq with great success.

An Air Shepherd command vehicle along with an arsenal of drones. (Credit: UAV and Drone Solutions) After identifying a potential poaching hotspot, Air Shepherd develops a flight plan for their drones, and sends the plan via email to its partners on the ground in wildlife reserves. Anti-poaching teams strategically position rangers and deploy a mobile ground control vehicle to the scene. Then, they launch a fleet of drones equipped with infrared cameras and GPS units that autonomously fly along preplanned routes, feeding live camera images back to the control van. When poachers are spotted, armed rangers are deployed to intercept them before damage is done.

The predictive software allows drone operators and park rangers to preemptively move into position, giving them a huge advantage over poachers. Air Shepherd's partners in southern Africa have been testing their technique over the past two years, with pilots carrying out more than 400 missions and logging over 1,000 flight hours. The results have been encouraging: During tests on private reserves, where, combined, as many as 19 rhinos were being killed each month, there were no deaths reported for six months thanks to Air Shepherd's assistance.

Inside a mobile command center, where live video is fed from flying drone scouts. (Credit: UAV and Drone Solutions) Now, Air Shepherd is looking to raise $500,000 through the online fundraising sight Indiegogo to implement a one-year program with Ezemvelo KwaZulu-Natal Wildlife, which oversees nine wildlife refuges in South Africa. The money would be used to fund a mobile command van, three drones, two drone operators, the predictive software and other equipment. Air Shepherd is still $200,000 shy of their goal, with the Indiegogo fundraising window closing April 11. Air Shepherd’s story is just another example of how drones are are being used to build a better world. You can read more about how drones are saving animal and human lives in the first issue of Drone 360, now available on newsstands and online.