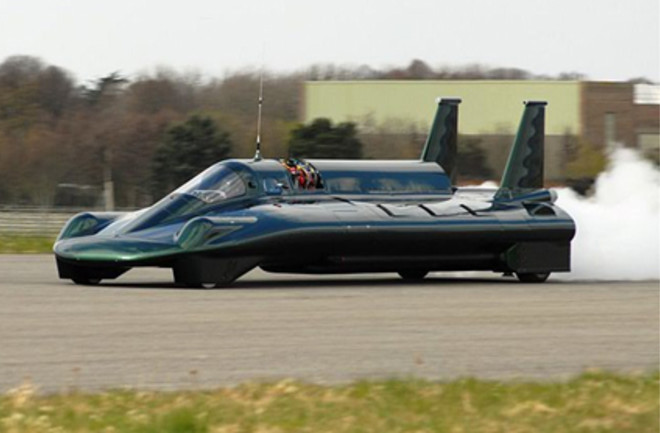 An unusual vehicle known as “the fastest kettle in the world” has busted the speed record for steam-powered cars, a record set at the beginning of the automobile age. The sleek car, named Inspiration, achieved an average speed of 139.8 miles per hour over the course of the two required runs at Edwards Air Force Base in California. The Inspiration may sound like a crawling turtle compared to the jet-powered car that holds the world's land speed record: Thrust SSC roared up to a speed of 763 miles per hour in 1997. But the Inspiration, a British-built car, can claim other bragging rights: The car's

boilers can produce steam at a rate fast enough to make 23 cups of tea a second–an enjoyably British fact [The Guardian].

The previous steam-powered speed record of 127 miles per hour was set in 1906 by Fred Marriott at Daytona Beach, driving a modified version of a popular car known as the Stanley Steamer.

Many of the earliest road vehicles were powered by steam, which were easier and safer to start than early gas-powered cars, which had to be cranked by hand. But by the 1920s, the convenience of the internal combustion engine had essentially made steam cars obsolete [New Scientist].

The British Steam Car Team has been tinkering with their design for the Inspiration for years, and even after they arrived at Edwards Air Force Base they were bedeviled by electrical faults and valve problems in the car's complicated boiler system.

The car's engine burns liquid petroleum gas to heat water in 12 suitcase-sized boilers, creating steam heated to 400°C. The steam then drives a two-stage turbine that spins at 13,000 revolutions per minute to power its wheels [New Scientist].

But you aren't likely to see steam cars on the race track anytime soon: Inspiration required two miles to accelerate to its record speed, and another two miles at the end to slow down with the aid of a parachute. Related Content: 80beats: A Chitty Chitty Bang Bang For Everyone! New Flying Car Takes to the Sky 80beats: Supersonic Car Aims to Destroy the Land-Speed Record, Top 1,000 MPH DISCOVER: 6 Blue-Sky Ideas for Revolutionizing the Automobile (photo gallery) Image: British Steam Car Challenge